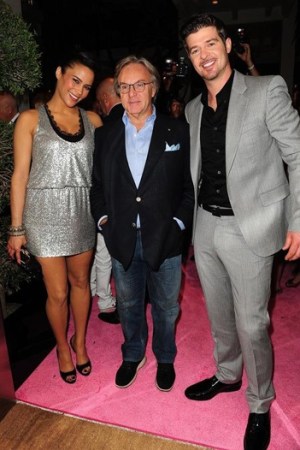 FAKE OUT: LIM College students have taken their anticounterfeiting message to the streets. In the Fashion Center windows on West 38th Street (between Seventh and Eighth Avenues), LIM’s visual merchandising students have created Chanel-like handbags, a suit, hats and feathers made entirely of bubble wrap. The windows, which will be up until Dec. 16, carry the message: “Burst the bubble on fashion fakes.”

PARSONS STARS: In April, Vera Wang and William K. Fung, group managing director of Li & Fung Ltd., will share the spotlight at Parsons The New School for Design’s 2010 Fashion Benefit. The school named Wang and Fung as the 2010 honorees of the annual gala, which raises scholarship funds and features a runway fashion show with designs from the graduating class. The event is scheduled for April 26 at Chelsea Piers’ Pier Sixty.

ALL THAT GLITTERS: “It’s like something from a fairy tale, like it’s come from a magic lamp,” said David Collins at the unveiling of the sparkling white tropical Christmas tree designed by John Galliano for Dior at London’s Claridge’s hotel last week. Sir Paul Smith, Stephen Jones, Bianca Jagger, Jasmine Guinness, Lulu Guinness and Amber Le Bon all gathered on the hotel’s sweeping staircase to peek at the glittering white tree adorned with orchids, vines and a blue-and-white leopard figure. Galliano’s set designer, Michael Howells, said he’d been dressing the tree until 1 a.m. the previous evening. “John came up with the idea of a tropical tree,” said Howells. “After all, people celebrate Christmas all over the world.” Meanwhile, Jasmine Guinness’ attention was focused on a display of some of Galliano’s outlandish Dior couture dresses, such as a fall 1998 look called Princess Pocahontas, that had been set up on mannequins near the tree. “Seeing them makes me wish I had an endless budget to go off on research trips,” said the model-turned-designer, who’d spent the day toiling over her fall 2010 designs for the online retailer Very.

FASHION WONDERLAND: Lewis Carroll’s Alice is in for an imaginary fashion makeover. Timed for the release of Tim Burton’s much-anticipated take on the author’s children’s classic, “Alice in Wonderland,” Printemps has invited Alexander McQueen, Christopher Kane, Maison Martin Margiela, Bernhard Willhelm, Haider Ackermann, Manish Arora and Ann Demeulemeester to each dream up a one-off dress for Alice. The resulting frocks will be exhibited in the store’s windows from the end of February, in time for Paris Fashion Week.

ALL ABOUT MY MOTHER: Those who didn’t make it down to Miami last week still have a chance to fit some art viewing into their social calendar. On Wednesday in New York’s SoHo, Alex Kramer and Daniel Baker are hosting cocktails to celebrate “The Life and Works of Manuel Pardo.” Born in Cuba and raised in New York City since the age of 10, Manuel Pardo’s color-saturated works have been shown everywhere from the New Museum of Contemporary Art in New York to the K.O. Gallery in Mexico City. Next year, Pardo, 57, will be the subject of a retrospective at the Main Art Gallery at Cal State Fullerton in California. Growing up, his single mother, Gladys, worked as a factory laborer to support his family. When Pardo turned 40, he decided to immortalize her in his art with an ongoing series called “Mother and I.” His canvases show glamorous women in late Fifties- and early Sixties-style clothes, surrounded by decadent objects and sumptuous decor.

“Financially, I couldn’t get her a great gift, so I decided to bring her into history with me because she was responsible for me being who I was. The work itself is about her time period. I give her in the work everything she did not have in real life: the gowns, the hairdos, the lavish surroundings, the shoes, everything,” explained Pardo, who has known Baker since he interned for him at age 16 (Baker’s father collected Pardo’s paintings).

The pieces on display Wednesday are from his last year and a half of toil, including “Stardust Drawings” made with layer upon layer of Sakura glitter pens and a recent chartreuse-hued collection called “The Envy Works.” And if any of the patterned, curve-hugging dresses his women wear seem appealing, good luck hunting them down. “I don’t research anything — it’s all from my imagination,” said Pardo.

“Truthfully, I’m a frustrated fashion designer. But I fell in love with painting.”

ITALIAN STYLE: Tokyo got a heaping dose of dolce vita-style elegance Thursday night when Salvatore Ferragamo staged a show reprising its spring collection at the residence of the Italian ambassador. Guests watched as Ai Tominaga closed the show in a floor-length black gown before noshing on mounds of pasta and imbibing an ample selection of Italian wines. The pouring rain only accentuated the beauty of a stunning Japanese garden out back. The show marked the conclusion of Italy in Japan 2009, a string of cultural and promotional events organized by the Italian Embassy. Ferragamo chief executive officer Michele Norsa said the evening capped a difficult year for Italy, Japan and the rest of the world, but symbolizes everyone’s hope for a better 2010.