Giorgio Armani and Jeremy Scott were among designers who toured a photo display.

By Luisa Zargani and Alessandra Turra on September 29, 2015
View Slideshow 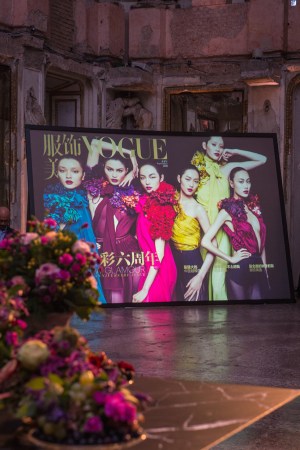 After Much Ado, Harry and Meghan Have Launched Their Archewell Foundation Web Site

MILAN — Despite Angelica Cheung’s reluctance to mark Vogue China’s 10th anniversary, several fashion industry A-listers attended the cocktail event held at the Neoclassic Sala delle Cariatidi at Milan’s Royal Palace on Monday evening.  “I know there is a lot to celebrate, but my mood is not about looking back, my mind is on future projects,” said Cheung, editor in chief of the magazine since its launch.

“I was shocked right from the start by the quality of the magazine and its layout, so I found it an interesting job for me, a way for me to learn from it, not the other way around,” said Mario Testino, checking out the photos, including the one of the October issue fronted by Karlie Kloss, that were scrolling on giant screens at the imposing venue. Kloss, wearing a black Marni dress, a silk Prada scarf and Fendi shoes, is a pro at celebrating Vogue China as also she marked the magazine’s fifth anniversary at an event in China. The globetrotting model was flying to London the following day, and then to Paris.

“It’s modern, elegant, with lots of character and research,” Giorgio Armani opined on the magazine. The designer took his time walking around the room with Cheung, stopping to ask questions about and comment on the images.

Jeremy Scott, creative director at Moschino, said he was “inspired by how the ancient and the modern coexist together in such a seamless way [in China]. It’s such a creative, inspiring combination and juxtaposition of these two things.”

Massimiliano Giornetti, creative director at Salvatore Ferragamo, said his first trip to the country was around 20 years ago. “I’m very passionate about Chinese culture and I’m a collector of Chinese art, especially porcelain and paintings, so I had the chance to really discover their roots there. In a way it was also a bit of a disappointment because there is more attention for Chinese art abroad than in the country itself.” Ferragamo is planning an event in Shanghai in the coming months to mark 20 years of the company in China.

Calvin Klein Collection designer Francisco Costa recalled his first trip to China “around seven years ago,” with a stop in Beijing and at the mausoleum of Qin Shi Huang to see its clay warriors. “I found this incredible shop and bought these tins of wonderful paint, which I managed to bring back with me on the plane,” said Costa, still marveling at his success in flying back with his find.

“My first time to China was a life ago,” said Tod’s chief executive officer Diego Della Valle, who takes trips to the Asian countries three or four times per year. “Vogue China is a great magazine and Angelica is a force of nature.”

“It’s a very, very deep relationship [with the magazine],” said Uma Wang. “I have been very lucky because I was the first Chinese designer Vogue China presented to the world. This is the reason I had so many opportunities.”