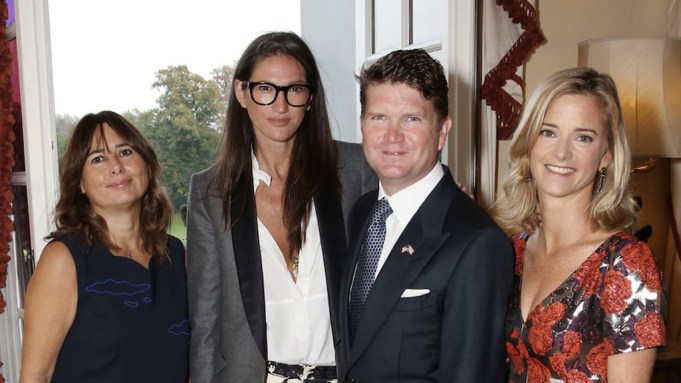 AMERICAN DREAMS: Matthew Barzun, the U.S. ambassador to the Court of St. James’, knows how to party. Not only did he and his wife, Brooke Barzun, open the doors to Winfield House, their official London residence, to fashion industry revelers on Tuesday night, but he personally chose the dance floor design — and parts of the playlist.

For the party that was co-hosted by British Vogue in association with J.Crew, Barzun’s musical selections — including a host of Eighties pop classics — were emitted from “The Fun Palace,” a mobile DJ booth and dance floor surrounded by glass walls that could change from transparent to opaque with the flip of a switch.

“I saw it at the Serpentine summer party and thought it was really cool, and perfect for party like this one,” he told WWD. “It’s so great to be able to celebrate creativity with all these people who are literally making things. It makes a nice change from my day-to-day, when I spend so much time with people trying to tear things down.”

While Champagne was on offer, the cans of Pabst Blue Ribbon beer chilling in silver ice buckets reflected the Barzuns’ playful attitude.

British Vogue editor Alexandra Shulman said: “I have wanted to have a fashion week party here for a while, so I nabbed Brooke very soon into her arrival to set it up, and they have been such gracious hosts.”

Brooke Barzun said she was enjoying discovering her new city. “In the year, I have found that I really love exploring Shoreditch and Islington; I like to just go and sit in their cafés,” she said.

Cara Delevingne and Suki Waterhouse took selfies in the bathroom, while Lindsay Lohan arrived almost three hours after the party had started.