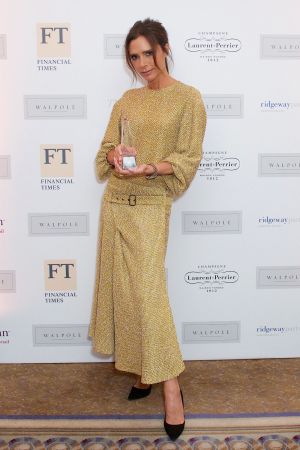 LAP OF LUXURY: Victoria Beckham and Emilia Wickstead were among the winners of Walpole’s annual British Luxury Awards, which recognizes achievements in the industry, from fashion and food to watches and cars.

Beckham, who swept in and out of the Dorchester hotel ballroom in London, where the awards dinner took place, accepted the top prize for luxury brand of the year.

“As an independent British brand, I am humbled to be here among so many big names,” said Beckham, who accepted the award on behalf of her team.

Walpole is the luxury industry alliance, similar to France’s Comité Colbert and Italy’s Altagamma, that promotes and seeks to protect the interests of British luxury brands. Its 170 members include Rolls-Royce, Jimmy Choo, Boodles and Harrods.

London Fashion Week designer Wickstead won the new talent award, while jeweler Pippa Small picked up the prize for most socially responsible brand. Small works with artisans in countries such as Afghanistan and Burma, and is known for her raw-edged, colored stones.

Lord Charles March, who has transformed his family’s Goodwood estate in West Sussex, England, into a mecca of horse and motor racing, walked away with the award for luxury experience. Valentino won for international luxury brand.

Charlotte Dellal was named luxury brand ambassador of the year, while Julia Peyton-Jones, who is stepping down as codirector of London’s Serpentine Gallery next year after 25 years at the helm, won the first leading light of British luxury award.

She put luxury into perspective, joking about her Lanvin outfit, and quoting the Italian poet and novelist Cesare Pavese.

She accepted her award dressed in a long black skirt and sleeveless top, courtesy of Alber Elbaz, Lanvin’s outgoing designer. “This is how I go to the Serpentine every day,” she said, her long sparkling earrings catching the light.

Peyton-Jones also held forth on the arts and luxury. “Art allows us the time and space contemplate our place in the world,” she said, later quoting Pavese: “Everything is a luxury, starting with being in the world.”