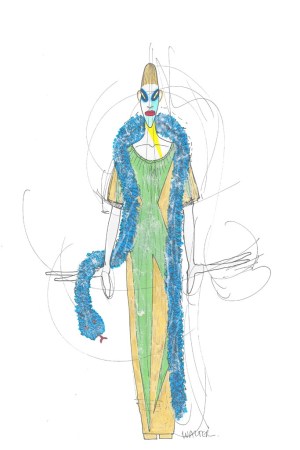 WALK LIKE AN EGYPTIAN: Belgian designer Walter Van Beirendonck will unveil his first costume designs for an opera Friday night at Antwerp’s Opera Vlaanderen. English director and designer Nigel Lowery is overseeing the production of “Akhnaten,” written by American composer Phillip Glass in 1983 and based on the life of an Egyptian pharaoh.

Van Beirendonck’s costumes, infused with Egyptian mysticism, echo the designer’s highly graphic and wild approach to fashion. The main characters of the imperial court all wear colorful makeup, prosthetic chins and outfits heavy on bright turquoise and gold Lurex. Akhnaten’s looks are slightly inspired by David Bowie stage costumes in the Seventies, an inexhaustible source of inspiration for the designer.