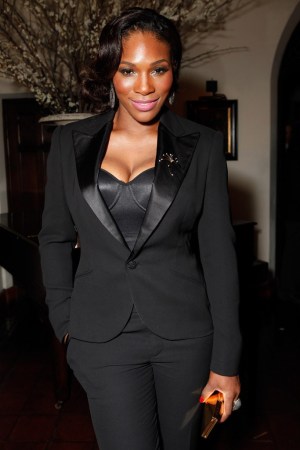 IN TUNE: The post-Grammy Warner Music and In Style party at the Chateau Marmont on Sunday brought out Fergie, Jared Leto, Common, Lana Del Rey and Nicole Richie. Despite a few somber minutes when the DJ paid homage to Whitney Houston, the mood was upbeat, including an energetic surprise performance by Bruno Mars. Mars, who lost Record of the Year to Adele, poked fun at his defeat. “I’d like to welcome you to the loser party,” he said. “But we’re gonna have fun.” His diverse set of covers from James Brown, Sting, Michael Jackson, Jay-Z, LMFAO and MC Hammer brought Richie and Joel Madden, Chelsea Handler and Fergie to their feet. Unable to find space on the packed dance floor, Handler danced on a planter in the courtyard, while Fergie stood on the side of the stage and “Glee’s” Chord Overstreet recorded the performance on his phone from the dance floor. “That was amazing,” said Fergie. Music industry newbie Lana Del Rey turned out for the after party as well, wearing a Moschino dress and flats, singing the praises of Adele, who swept the show with six wins. “I was really happy for Adele,” said Del Rey, who skipped the red carpet for an intimate viewing party at Universal Music chief executive Lucian Grainge’s home. “It was so nice to hear her sing, and Jennifer Hudson’s tribute [to Houston] was touching.”