The athleticwear giant is suing the smaller brand for trademark infringement related to its popular Dunk sneakers.

The future of the Warren Lotas brand seems to be in a precarious position as it faces a lawsuit from Nike.

Warren Lotas, the man behind the Los Angeles streetwear brand, which he started in college and has since turned into a sought-after line of punk-inspired streetwear staples such as hoodies and sneakers, has shut down the brand’s e-commerce site and appears to have halted posting to Instagram since being sued by Nike on Wednesday. Although Warren Lotas sells other goods, nothing is available for sale and the site simply says it is “closed.” Whether this is permanent could not be discerned, and Lotas could not be reached for comment.

Nike is suing the smaller brand over its manufacture and sale of what Lotas calls “custom dunks” — shoes that make obvious use of Nike’s famed 35-year-old shoe style, with minor adjustments and, according to Lotas, luxury quality components. Warren Lotas “dunks” retail for about $300, but often hit the streetwear resale market at more than triple that price.

Lotas about two weeks ago released the newest version of his sneaker, which was designed in partnership with Jeff Staple of another popular streetwear brand Staple Pigeon. On Instagram, Lotas called the shoe “an official reinterpretation” of a “classic” shoe. But it was not endorsed by Nike, nor does it partnership with it, and the company is not having it.

OFFICIAL @STAPLEPIGEON X WL REINTERPRETED OG SHOES ARE GONE – Thank you Jeff and Billy for giving me an opportunity to be a part of your legacy. Love me or hate me, I’m glad we can include so many more people in this moment. An official reinterpretation of a fucking CLASSIC! – PLEASE READ: We will leave the sneakers up for 15 MINUTES WITHOUT A SET QUANTITY. We want this shoe to be accessible to EVERYONE. EVERYONE THAT WANTS A PAIR WILL GET A PAIR. – THIS IS A PRE-ORDER THAT WILL TAKE 3-4 MONTHS TO PRODUCE. PLEASE REMEMBER THIS BEFORE YOU PURCHASE. IT IS A PRE-ORDER. THIS IS A WARREN LOTAS SHOE, IT IS PRODUCED FROM SCRATCH BY ME. PLEASE KNOW THAT. NO ALIBABA BULLSHIT. ITALIAN MATERIALS.

In its lawsuit filed with a federal court in Los Angeles, against Lotas as an individual and his brand, Nike called Lotas a “bad actor” merely “promoting and selling fakes of coveted Nike Dunks.”

“Nike protects its iconic sneaker designs, and its intellectual property in those designs, by rooting-out bad actors that undermine the DNA of sneaker culture by promoting and selling fakes,” the company wrote.

Ironically, Staple of Staple Pigeon only today posted a video to Instagram promoting a mini-documentary he participated in, done by Nike, regarding the creation of Dunks and their maintained popularity.

Nike added that although Lotas hasn’t been doing his “version” of Dunks for long, “there is already confusion in the marketplace regarding whether they are legitimate customizations or illegal fakes.” 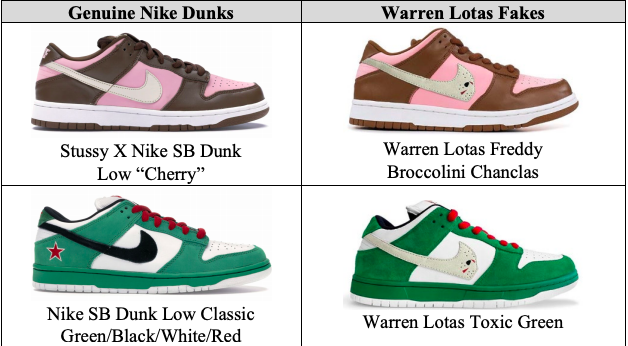 A Nike comparison of its shoes, versus Lotas’ shoes.

“Warren Lotas intentionally created the confusion, and he is attempting to capitalize on it.”

The company is suing Lotas for unspecified damages, all of his profits from the shoes, and to deliver any unsold goods to Nike “for destruction,” in order to keep them out of the marketplace.