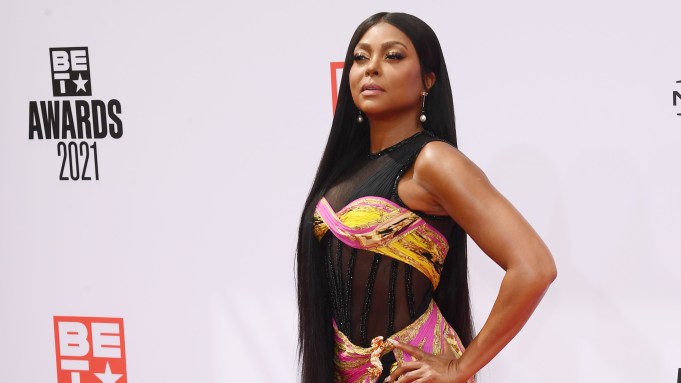 The BET Awards are making their return Sunday night, celebrating the year’s biggest achievements across music, film, sports and more.

Billed as “Culture’s Biggest Night,” the 2022 BET Awards will include a lengthy slate of performances from Lizzo, Jack Harlow, Roddy Ricch, Ella Mai and more. Actress Taraji P. Henson will be hosting the show for the second year in a row.

Here, WWD breaks down everything you need to know about the 2022 BET Awards. Read on for more.

Actress Taraji P. Henson is returning to host the awards show for the second year in a row.

Who is nominated at the 2022 BET Awards?

For music, Doja Cat is leading the pack with six nominations, including for Best Female R&B/Pop Artist, Best Female Hip Hop Artist and Album of the Year for “Planet Her.”

Other Album of the Year nominees include Silk Sonic for “An Evening With Silk Sonic,” H.E.R. for “Back of My Mind,” Tyler, the Creator for “Call Me If You Get Lost,” Drake for “Certified Lover Boy,” Kanye West for “Donda” and Jazmine Sullivan for “Heaux Tales, Mo’Tales: The Deluxe.”

On the film side, Best Movie nominations went to “Candyman,” “King Richard,” “Respect,” “Space Jam: A New Legacy,” “Summer of Soul” and “The Harder They Fall.” Best Actor nominations include Adrian Holmes for “Bel Air,” Anthony Anderson for “Black-ish,” Damson Idris for “Snowfall,” Denzel Washington for “The Tragedy of Macbeth,” Forest Whitaker for “Respect” and “Godfather of Harlem,” Jabari Banks for “Bel Air” and Sterling K. Brown for “This Is Us.”

Who is performing at the 2022 BET Awards?

The awards show will include a lengthy slate of performances by Lizzo, Jack Harlow, Roddy Ricch, Chance the Rapper, Ella Mai, Babyface, Chlöe, Doechii, Giveon, Fireboy DML and many others.

Are there any honorary awards?

The awards show will air on BET on Sunday starting at 8 p.m. ET. The 2022 BET Awards can also be streamed through Hulu, AT&T TV Now, YouTube TV, Fubo TV, Sling TV and Locast with free trials and memberships.

See the celebrity arrivals on the red carpet of the 2022 BET Awards.

See All of the Fashion at the 2021 BET Awards

The Standout Fashion Looks From the Time 100 Gala

The Best Fashion Moments From the Tribeca Film Festival