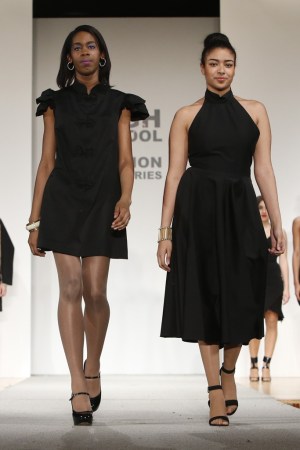 WAY BEYOND HOME EC: Barneys New York’s relationship with the High School of Fashion Industries dates back decades to Fred Pressman, who introduced the store’s ongoing summer youth program, which selected students from the school, located on 24th Street in Manhattan, for part-time jobs in Barneys. Now that Barneys is moving back to the neighborhood, returning to its original home at Seventh Avenue and 16th Street in 2017, it’s reengaging with the school on a more active level.

“Tom [Kalenderian] and I thought it was a great time to be involved,” said Daniella Vitale, Barneys’ chief operating officer and senior executive vice president, who was being honored along with Kalenderian, Barneys’ executive vice president and general merchandise manager of men’s, home and children’s, Wednesday night at HSFI’s 28th Annual Student Style Celebration. “We take the fund-raising part of this very seriously,” said Vitale when she accepted her award from Paulette Garafalo, president of Brooks Brothers, noting that Wednesday’s event had raised the most money in the school’s history.

Cue the unbridled applause from the students. The student body’s enthusiasm was in stark contrast — refreshingly so — to the subdued nature of the typical fashion awards ceremony. Nowhere was that more evident than during the student fashion show, an impressively choreographed series of six groups ranging from denim to bridal, plus a black dress and white shirt series designed in tandem with Anne Klein, modeled by fellow students. “I’ve never seen so much energy in a room,” said Vitale. “Please never let that go away.”

For his part, Kalenderian — who, as emcee Mike Woods of Fox 5 News missed no opportunity to point out, has been with Barneys for 35 years — urged students to never underestimate the potential of a part-time job. “Mr. Pressman had a dream that each year he could offer meaningful employment and experience to high school students during the summer. His goal was positive influence,” said Kalenderian. “Thirty-five years ago as a college graduate, I too was a recipient of Mr. Pressman’s generosity when I started as a 30-day temp.”