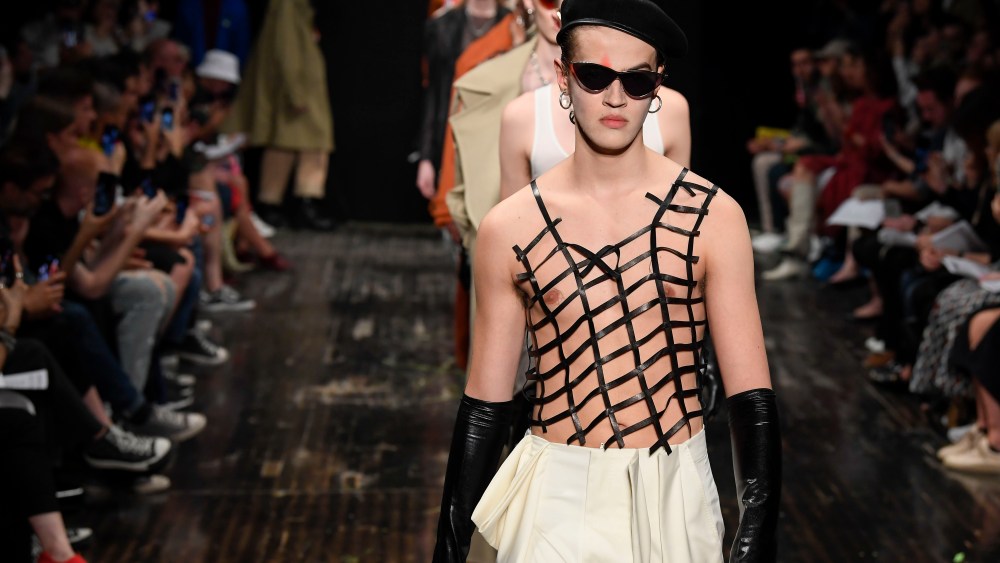 LONDON — Eight MA men’s wear students from the University of Westminster, picked from a class of 16, showcased their talents during London Men’s Fashion Week, which wrapped on Monday night.

They showed Nineties and sci-fi looks at Heaven, the vaulted Charing Cross gay nightclub that’s regularly filled with partygoers dressed similarly to the attendees and models at the show.

While each designer drew inspiration from different sources — childhood, the environment, contemporary society and the past — they all played with oversized silhouettes and proportions. There was also a post-apocalyptic feel to the show, with nods to Matrix-like styles.

Robyn Lynch offered a colorful line-up of looks — the colors of the Irish flag — that immediately brightened the dim venue. Chunky knitwear jumpers, which were all hand-dyed, added texture to the full tonal looks while models also carried large backpacks.

Maureen Kelly-Pain focused on deconstructing classic pieces such as the polo shirt and short sleeve T-shirts, which were later reassembled with plaster to give stiffness to the soft cotton pieces. These were paired with high-waisted and flared jeans, while one model carried a trompe l’oeil briefcase down the aisle.

Nineties references were seen in Christine Shangqian Xu’s collection. She presented a chainmail cowl neck top and chainmail-embellished trousers — that were worn apart. Her looks were heavy on Matrix and Americana  references, with cowboy boots and lots of denim.

Roman Hoering dressed his models in ski masks and big white chunky boots. Inspired by folklore and a remote Austrian ski village, his outfits consisted of pleated skirts layered on top of performance skiwear and wooly textured trousers. Big statement outerwear was the highlight: One model wore a black, heavy metallic coat and another wore an oversized brown fur coat.

Sustainability was the driver behind Priya Ahluwalia’s collection. She renewed second-hand clothes that she pieced together to create a line of patchwork garments. Elsewhere, Robert Newman looked to nature, experimenting with new fabrics. The highlights were a shawl jacket embellished with compressed grass and a yellow splattered black coat that looked like pollen.

Louise Yinghan Liu’s collection was a fusion of tradition and modernity. There was uniformity to her boxy outerwear pieces that came in shades of military green, blue and yellow. Liu added softness to it by pairing these with hand-knitted jumpers.