Bob Colacello is no stranger to parties. After all, the author certainly had his fair share last year, when he celebrated his 60th birthday and the publishing of his book, “Out.” 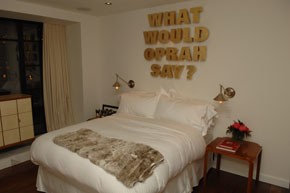 Bob Colacello is no stranger to parties. After all, the author certainly had his fair share last year, when he celebrated his 60th birthday and the publishing of his book, “Out.” But that didn’t stop Adam Lippes from throwing Colacello a party to celebrate the second printing of that book and his 61st birthday. “Everyone thinks that getting a book published is a big deal, but getting a second printing is a really big deal,” said Lippes in between attending to hosting duties on Saturday night. Gathered at his West Village pad was an intimate group, including Francisco Costa, Eva Lorenzotti, Marjorie Gubelmann and Coco Brandolini.

As the birthday boy reminisced about his days working for Andy Warhol, Valentino chimed in, “I went to visit the Factory and I remember I had to be careful where I stepped because there were paintings drying all over the floor,” he said, demonstrating how he would tip toe around. “Warhol did my portrait in 1974, but [back then] $15,000 or $20,000 was a lot of money for a painting. I had to pay millions for it later.”

Lippes’ apartment might not have had any Warhols, but there is enough contemporary art to impress any gallerist, including the “What Would Oprah Say” that Lippes used to display in his New York store. (The designer got a kick start to his business when he appeared on Oprah’s show a couple years ago).

And after cupcakes were served and company crowded around to sing Colacello “Happy Birthday,” Lippes cranked up the Michael Jackson and pulled guests to dance in the living room.