“We didn’t talk about anything sensible at all; blagging tickets to Glastonbury, pole dancing, general bawdiness,” said Patrick Grant. 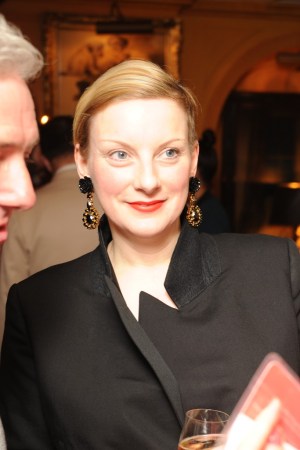 WICKED WHISPERS: “We didn’t talk about anything sensible at all; blagging tickets to Glastonbury, pole dancing, general bawdiness,” said Patrick Grant of the dinner conversation — at his table, at least — at Annabel’s on Tuesday night to mark the end of London Collections: Men. Hosted by British GQ editor Dylan Jones and Tracey Emin, the dinner had the cozy, jubilant feeling of a family wedding, with Emin taking on the role of best man, telling amusing — and incriminating — anecdotes.

“I remember asking Dylan three years ago why there wasn’t a men’s fashion week,” she said. “And that’s about the most I have contributed to GQ since I was so violently ejected years ago. But it seems as though I’ve been welcomed back into the fold,” said Emin, referring to her former stint as a contributing editor at the title.

“Alex Bilmes [editor of Esquire and former commissioning editor at GQ] and I used to have these really long, drunken lunches over an afternoon. We got back to the office and Dylan cornered us, and asked what thrilling projects we had come up with to justify the bill, and all we could come up with was…Celebrity Star Trek with Elton John as Spock,” said Emin.