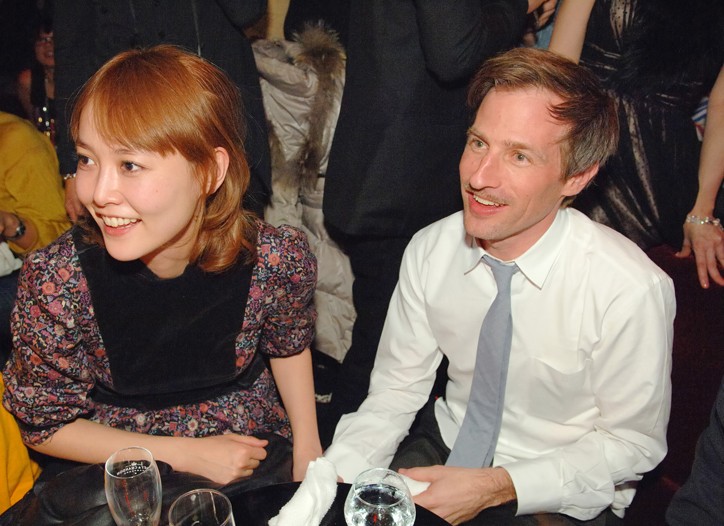 WILD TIMES: Director Spike Jonze and Opening Ceremony co-owner Humberto Leon are in Tokyo this week promoting the launch of their fashion collaboration for Jonze’s movie “Where the Wild Things Are.” On Tuesday, the pair hosted a screening of the film, followed by an after party at hip nightclub Le Baron de Paris, which attracted the likes of actress Rinko Kikuchi. Guests at the party donned masks of the film’s characters as they let loose on the dance floor. The next day, Jonze signed autographs and fielded questions from fans at Opening Ceremony’s Tokyo store. “Japan is a really fun place, and launching the collection here feels very natural,” Leon said. “Japan is so accepting of fun merchandise that it feels right.”

THE NEXT WAVE: Always searching for new talent, the Council of Fashion Designers of America named student Gohar Rajabzadeh as the winner of the 2010 Liz Claiborne Fashion Scholarship Award. Rajabzadeh, a senior at Miami International University of Art & Design, will win $25,000 as part of the merit-based award, which was founded by Art Ortenberg, the husband and business partner of the late Liz Claiborne. Rajabzadeh also won the Cool vs. Cruel competition by The Humane Society of the United States last year.

TEEING UP ELIN: Nike is standing by the beleaguered Tiger Woods, but Tretorn is said to be courting his wife, Elin Nordegren, for an endorsement deal. The blonde Swede has had preliminary talks with Tretorn, according to a source familiar with the negotiations. The Stockholm-born Nordegren would appear to be well-suited for Tretorn, a Swedish label with a strong overseas presence. Tretorn executives did not respond to requests for comments Wednesday.

DINING WITH DENNIS: Dennis Basso whipped up his family’s favorite Christmas Eve recipe for shrimp scampi on “The Martha Stewart Show” Wednesday morning. Later in the day, 60 guests at his holiday luncheon were also treated to the entrée. Doubles did the honors for the latter. Aside from getting a tasting of Basso’s no-longer-secret family recipe, Pamela Fiori, Marjorie Gubelmann, Gigi Mortimer, Jaime Gregory, Nina Griscom, Daisy de Kanavos and other diners heard about the designer’s latest creations: Penélope Cruz and Nicole Kidman wear his furs in the new movie “Nine.”

FAMILY STYLE: Pierluigi Loro Piana and the Italian Trade Commission’s Aniello Musella rounded up a group of young designers Tuesday night for a dinner at Casa Lever to celebrate Italian-made textiles and to encourage them to attend next year’s Milano Unica. Piana’s wife, Laura, helped warm up the crowd. Eager to advance their respective businesses, Sophie Thelleat, Jeffrey Monteiro and Carlos Campos planned to maximize their work days by staying in New York over the holidays. Renato Cavero, Loris Diran, Alexander Wang’s fabric coordinator Sara Hays, and Ellen Tracey’s Iun Lee were also at the table. As the winner of this year’s CFDA/Vogue Fashion Fund, Theallet is keen to start gleaning tips from her mentor Oscar de la Renta. But Piana is hopeful he will manage to steal Theallet away from her design studio next year for a spell. “All you’re missing is a plane ticket to Milan,” he told her.

DEPECHE MODEL: Hublot continues its string of collaborations via a partnership with electronic band Depeche Mode. The watchmaker is partnering with the rock stars to create 12 special edition Depeche Mode Big Bang watches. The one-offs, which will feature one of the band’s album covers on its dial, will be auctioned via the Web on Feb. 1, and all proceeds from the sale will be donated to the Teenage Cancer Trust, which aids adolescents with cancer. The collaboration is associated with a benefit concert Depeche Mode will play in London on Feb. 17 for the same charity.

THINK PINK: Having been linked to The Plaza for nearly 55 years, the mischievous children’s book character “Eloise” now has a store there to call her own. Decorated in her signature pink with a rug imprinted with lines from Kay Thompson’s legendary tale, the 2,100-square-foot space is perfectly appointed with an array of Eloise memorabilia. (Fashion types know that Tommy Hilfiger now lives on the hotel’s “room on the tippy-top floor.”)

After meeting Eloise illustrator Hilary Knight on opening day not long ago — who just happened to be there scoping the place out — six-year-old Grace Johnston was determined to check in again to see if the store’s namesake had arrived. “Do you know when her days off are?” Johnston asked the concierge behind the store’s front desk. No such luck — but like other opening day visitors, she settled for a few keepsakes — a $20 pink Eloise T-shirt, a $85 Eloise doll by Madame Alexander and an Eloise book. Lore has it Thompson’s goddaughter Liza Minnelli — who at one point lived at The Plaza with her mother, Judy Garland — or Thompson herself was the inspiration for the rambunctious icon. But plenty of others, including some New York women who have strolled in off the street have insisted they are the source, according to Kristin Franzese, The Plaza’s executive vice president of retail. Fans will be able to host tea parties, play dress up and listen to story hours in the months ahead, or take etiquette classes, if need be. As for Johnston, who was headed back to Seattle, she left a handwritten note with the concierge. Apparently, Eloise isn’t good about e-mail.