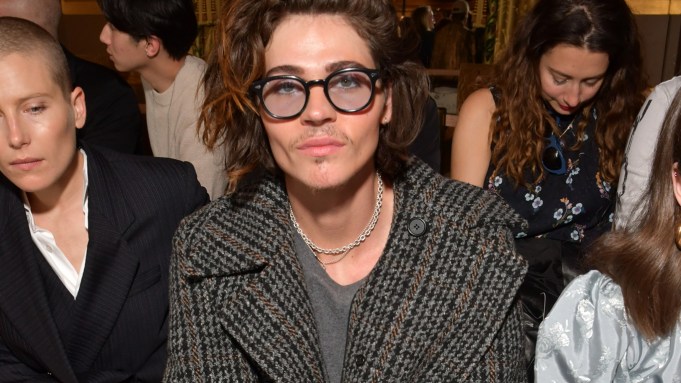 AMERICANS IN PARIS: That was the greeting shared by Will Peltz and the Haim sisters as they embraced front row at Stella McCartney Monday morning.

Peltz had recently wrapped “Time Freak,” in which he stars alongside Sophie Turner, due out in November. “It’s my first gay kiss with a man; it was interesting to play a gay role,” he said.

Food was top of his list of things to do while in the City of Light, he said. “I’m trying to eat chocolate crêpes as much as I can – that’s my favorite thing here.”

Alana Haim, who had just finished touring with her bandmate sisters, had a more elevated target for this visit. “I’ve been here so many times and I’ve never been to the Eiffel Tower, I’ve always seen it from afar,” she said. “We’re always working, we’re always here for just 24 hours. This is the trip!”

Further down the front row, Alexandra Richards, who was taking in her first show by “family friend” McCartney, was in town for a DJ set at the Sonia Rykiel party Thursday night.

“I’ve been hearing such good music at the shows, for me it’s very inspiring to bring some older tunes to my playlist,” she said. For example? “Some Daft Punk, I love their classic stuff […] It will be fun to bring back some funky Nineties stuff. I feel like that’s just the mood right now.”