Will Smith to Wear Marc Jacobs in Oslo… Feeling Sheepish…

Will Smith will be looking good in Marc Jacobs when President Obama is presented with the Nobel Peace Prize in Oslo. 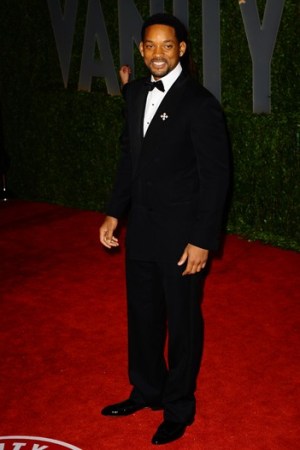 GET MARC, GET SET: Thanks to Marc Jacobs, Will Smith should be looking good when President Obama is presented with the Nobel Peace Prize Dec. 11 in Oslo. In fact, the designer will be suiting up the actor for all of the related festivities in Norway. Multiple custom suits and tuxedos have been made for Smith, and a mélange of fall ready-to-wear pieces have been sent his way.

This story first appeared in the December 4, 2009 issue of WWD. Subscribe Today.

A NEW RIFF: Silvia Fendi is ready to rock. Hanging out in the designer lounge at Design Miami, which her house is sponsoring for the third time, she has just come from a performance by the Los Angeles-based band OK Go. The concert is part of her mission to foster creativity in all fields, not to mention that her artisans handcrafted the band’s Gibson guitars in white leather from the Selleria collection with rivets and white goat fur.

“The band is taking these on their European tour, so they couldn’t just look good. They had to be technically perfect,” she said, calling the project a true collaboration that also involved Design Miami co-founder Ambra Medda and designer Moritz Waldemeyer, who outfitted the instruments with red and green lights to complete the Italian colors theme, and LED panels that display the band’s songs. “Any time an ‘F’ appears in their lyrics, it’s our double-F logo.” Fendi is negotiating with Gibson to launch a made-to-order program, while a few guitars, along with fur-lined cases and straps, are for sale at its Miami pop-up shop. It also showcases a collaboration with Paris graffiti artist André, whose designs are being embroidered on-site by students from Design and Architecture Senior High in Miami. The panels will be used for bags that the students embellish for a scholarship contest.

LENDING A HAND: Christian Estrosi, France’s Industry Minister, has voiced his support for troubled couturier Christian Lacroix following a court-sanctioned restructuring that will see the owner, Florida’s Falic Group, wind down couture, ready-to-wear and retail operations to focus on licensing. In a statement published on his Web site Wednesday, Estrosi said the economic climate in Dubai is likely to have played a part in slowing down a possible bid by Sheikh Al Hassan Bin Ali Al Nuaimi of Ajman. As a result, Estrosi has mobilized French diplomatic networks in the United Arab Emirates to “alert the sheikh of the urgency of the situation.” Estrosi is due to meet the couturier in the next few days. Meanwhile, Lacroix has indicated he will not cooperate with Falic on any future projects, which could include a relaunch of rtw and accessories under license.

SHOW BUSINESS: The lineup of men’s shows in Europe next month is already looking thinner as a handful of smaller houses said they will forego the runway. In Milan, Missoni will opt for a presentation Jan. 15 at the Rossana Orlandi design store while Moschino said it would present its collection at an as-yet-unnamed location. Meanwhile, there will be no show for Hugo in Paris. The development follows the news Bruno Pieters is stepping down from Hugo Boss’ progressive collection to concentrate on his own label. And while Italy’s Camera della Moda and France’s Chambre Syndicale are still fine-tuning their calendars, Dior Homme said it advanced from the final day of shows to Jan. 23, leaving Paul Smith and Lanvin to close fashion week in the City of Light on Sunday.


FEELING SHEEPISH: Claude and François-Xavier Lalanne’s surrealistic sculptures will get a retrospective next year at Les Arts Decoratifs in Paris beginning March 18. The exhibition will be organized by architect Peter Marino, an avid collector of their work who has used several sculptures to decorate Chanel and Dior boutiques. Among the works on display will be the bust of the model Veruschka, muse for the late Yves Saint Laurent, as well as Lalanne’s famous troupe of sheep. With his wife, Claude, also an artist, the late François-Xavier enjoyed great success among fashion designers, with commissions from the likes of Yves Saint Laurent and Pierre Bergé, Hubert de Givenchy and Karl Lagerfeld. Marc Jacobs, John Galliano, Reed Krakoff of Coach and François Pinault have also collected works by the Lalannes.