William and Kate on the Red Carpet

The royal couple attended the UK premiere of the nature documentary "African Cats" on Wednesday night. 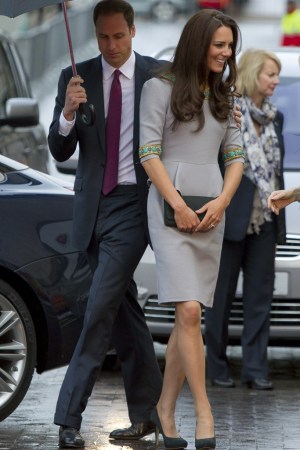 A ROAR ON THE RED CARPET: The Duke and Duchess of Cambridge braved London’s cold and rainy spring weather and made their first joint public appearance following the former’s return from a tour of duty in the Falkland Islands. On Wednesday night, the royal couple attended the U.K. premiere of the nature documentary “African Cats,” which will raise money for William’s U.K.-based animal conservation charity, Tusk Trust.

Kate wore a Matthew Williamson gray jacket with beading around the neck and sleeves, and a matching skirt. Guests included Mark Knopfler, lead singer-guitarist of Dire Straits, and Guy Ritchie. In the film, which was screened at the BFI Southbank, Patrick Stewart narrates the true-life story of a cheetah called Sita, bringing up her five cubs in the Masai Mara game reserve in Kenya, and of Mara, a six-month-old lion cub, being raised by her mother, Layla.

The royal couple, who will celebrate their first wedding anniversary privately on Sunday, will make two more appearances in London today: They will attend Goldsmiths’ Hall to congratulate two British Army teams that raced to the South Pole, and will later sweep into the Imperial War Museum to launch a fund-raising campaign. The museum wants to raise money for new rooms to house First World War exhibits marking the 100th anniversary of the outbreak of war in 1914.