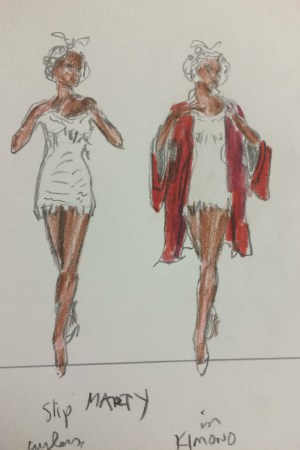 While it’s true that Hollywood often churns out one too many remakes, no one ever seems to tire of Danny, Sandy and the tunes from the musical “Grease.” Following the original Broadway production, the iconic 1978 movie and a current stage revival, Fox on Sunday will air “Grease: Live” an indoor/outdoor on-set production filmed in front of a studio audience and broadcast live on the network at 7 p.m. EST/tape delayed PST.

Starring Julianne Hough as Sandy, Broadway star Aaron Tveit as Danny Zuko, Vanessa Hudgens as Rizzo, the ambitious theater-meets-television undertaking, shot on three soundstages and an outdoor set at Warner Bros. Studios in Burbank, Calif. is set to go on, rain or shine.

That could mean a few wardrobe malfunctions for the 300-plus costumes designed by Theatre Hall of Famer and winner of six Tony Awards William Ivey Long, but he’s taking it in stride.

“I’m having the romp of my life,” said Long, who is currently on call for Broadway’s umpteenth “Cabaret” revival. “It’s a thrill for me because I’ve never done anything like this before. None of us have.”

Long called his interpretations of the 1958-59 costumes a “grace note” to the ones Albert Wolsky designed for the movie. “They are iconic images as you know, so I’m giving them today’s fit, tighter, longer, leaner.” For example, the blue jeans worn by Zuko and his T-Birds crew are a slimmer high-rise cut versus the original fuller dungarees. Long purchased bolts of vintage fabric to create the new dresses worn by the women. “Normally you don’t get to use vintage fabrics on Broadway because they are delicate, rare and you need duplicates, but we are only using these once,” he noted. “I can’t wait to see how it’ll photograph under the LED lights; I hope we still see the charm of the Fifties fabric.”

The prom and carnival scenes are the most populated, and the live audiences will also serve as extras. Long’s real talent for live transformations will be seen in “Grease’s” fantasy sequences such as “Greased Lightning” and “Beauty School Dropout.”

There will be some modern cast updates as well: singer Jessie J will serve as the on-air host, the Teen Angel played by Frankie Valli is now Boyz II Men, and other multihyphenate celebrity cast members include Mario Lopez as Vince Fontaine, Keke Palmer as Marty and Carly Rae Jepsen as Frenchy (both women also played “Cinderella” on Broadway).

While most people who still watch old-fashioned network television kvetch about the commercials, the breaks will serve as crucial set- and costume-change times. Hough will even make one of her changes while riding a golf cart from one soundstage to the next.

As for some of the iconic locations, Warner Bros.’ outdoor Town Hall set, where “The Music Man” was filmed, will be re-dressed as Rydell High. Set designer David Korins said the logistic complications of filming so many locations live required extreme planning but also made for great creative opportunities.

“I think the hybrid format creates a huge opportunity to show off what theater and film and TV do best,” he said. “It’s the combo of the greatest hits.” For example, theater devices like rotating stages and slide-open walls will become for home viewers a new experience combined with camera-scale tricks and cutting in and out of shots.

Of course, there will be some “Easter Eggs” sprinkled throughout for “Grease” fans to uncover. “There are some props and set pieces from the original movie peppered throughout. Some are huge and others are tiny nods. Just because you have a revival, you don’t have to throw out the baby with the bath water.”