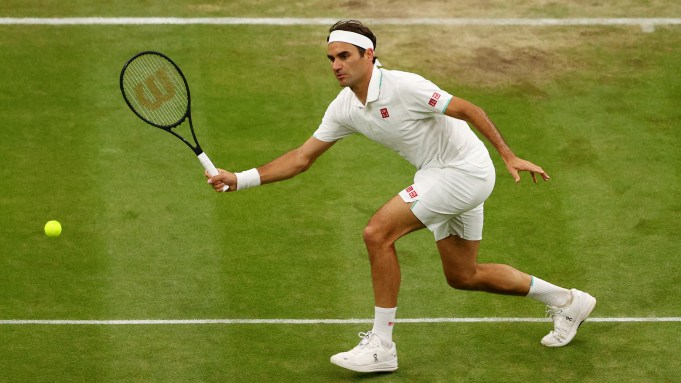 It’s not a coincidence that all the players partaking in Wimbledon wear all white for their matches.

Wearing the color white for the annual prestigious tennis tournament has been a tradition since the early days of tennis, dating to the late Victorian Era in the 1870s.

When household names such as Novak Djokovic, Rafael Nadal and Simona Halep play on Wimbledon courts this week, each player will be sporting all white from head-to-toe.

Over the centuries, the all-white rule has only become more strict. This year, however, an exception to the dress code was granted for players who want to show support for Ukraine. Players are allowed to wear blue and yellow.

Here, WWD breaks down all you need to know about Wimbledon’s all-white dress code. Scroll on for more.

What is the all-white dress code?

According to the official Wimbledon website, the dress code states that all players have to wear “suitable tennis attire that is almost entirely white,” which applies the moment players enter the court. It is strictly white, not including “off-white or cream.”

The only acceptable form of color is a single trim of color no wider than one centimeter on any item of clothing worn. Small sponsor logos on attire may contain color.

Equipment and medical supports should also be white, but may be colored “if absolutely necessary.”

Why was the dress code implemented?

The dress code dates back to when the sport during the Victorian Era, when it was important to be “incredibly proper,” according to Meredith Richards, the librarian at the International Tennis Hall of Fame.

Additionally, the color white was supposed to help reduce the visibility of sweat, thought to be more of a breathable color and less hot than other colors. It was also considered “improper to sweat” at the time, per Richards.

In fact, many tennis clubs, including Wimbledon, have put the all-white dress code in place, mostly for the sake of tradition.

How strict is the dress code?

The all-white dress code at Wimbledon is very strict.

If any official sees a player wearing more color than what is allowed, they will request an outfit change.

If a colored trim is under question, the official will bring out a tape measure to make sure it meets the dress code’s official guidelines.

Have there been players who broke the dress code?

Over the years, there have been a number of players who have tested the limits on the dress code, which have actually led to stricter reinforcements.

Andre Agassi famously boycotted Wimbledon from 1988 to 1990 specifically because of the all-white dress code as he preferred to wear colors. (He ended up wearing all-white when he decided to play in 1991 and took home the Grand Slam title the following year.)

In 2013, Roger Federer, known as one of the greatest tennis players of all time, wore white shoes with orange soles, causing a frenzy within the club. The following year, Wimbledon buckled down and clarified the rule of shoe sole colors.

The powerful Williams sister duo, Venus and Serena, have also pushed the boundaries on the dress code. In 2010 and 2012, Serena Williams wore brightly colored undershorts during the tournaments, which is something she did for good luck. (In 2010 and 2012, Williams did end up taking home the title.)

In 2017, Venus Williams wore a pink bra for her match against Elise Mertens, which caused officials to ask that she change halfway.

At this year’s tournament, Nick Kyrgios already broke the strict dress code by wearing red-and-white Jordan sneakers and wearing an all-red cap walking on and off the court.

How do players feel about the dress code?

While some players may think the all-white dress code is outdated, some embrace the tradition.

After breaking the dress code with his Jordan sneakers and red baseball cap this year, Kyrgios was questioned about it at a press conference later. “Because I do what I want. I’m not above the rules,” he responded. “I just like wearing my Jordans.”

(So far, Kyrgios has not yet been penalized for the latest offense. The Australian has already been fined twice, once for spitting in the direction of a spectator he claimed to be disrespecting him and another for audible obscenity during his third-round match with Stefanos Tsitsipas, ranked world number five.)

In 2015, Federer also criticized the extent of how strict the all-white rule has gotten.

“I love Wimbledon, but they’ve gone too far now,” he said in a press conference. “The rules have become ridiculously strict. I would be in favor of loosening it up a little bit. But it is what it is.”

However, some competitors such as Alison Riske-Amritraj, Mihaela Buzarnescu and Tommy Paul don’t mind the tradition.

“It’s very elegant. I really hope they keep this tradition forever, because it’s something different. You don’t always need to see colors on people’s clothes,” said Buzarnescu in a press conference at this year’s tournament.

Celebrities at Wimbledon 2021: See All the Photos