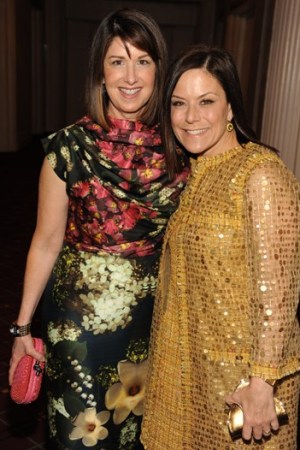 NEW YORK — With a crowd of 1,200 generating a record-setting $2.5 million at the Waldorf-Astoria Wednesday night, it’s clear that Women in Need has become a celebrated industry cause.

In addition to supporting WIN’s programs providing shelter and housing, substance abuse treatment, child care, job training and domestic violence services, the huge gala honored Karen Katz, president and chief executive officer of the Neiman Marcus Group, and Gina Sanders, president and ceo of the Fairchild Fashion Group, owner of WWD. Midway through the night, the ballroom became filled with gold and white balloons, each representing a contribution of $100 or $1,000 made on the spot by many of the designers, fashion executives, retailers and suppliers attending the event.

“We beat the hell out my good friend Brendan’s number that he raised last year,” Katz said, referring to the 2010 edition where Brendan Hoffman, ceo of Lord & Taylor, was honored along with Cindi Leive, editor in chief of Glamour magazine, and where $1.7 million was raised. “WIN profoundly changes the lives of women and children,” including the thousands being housed in the six WIN shelters in three New York City boroughs.

Sanders, who disclosed the amount raised for the cause, said WIN provides “a sense of safety, dignity and forward motion in life.”

“The biggest challenge we have faced in the past decade is more and more families find themselves one step closer to homelessness,” said Bonnie Stone, president and ceo of WIN.

“Tonight there are 2,500 individuals sleeping securely in WIN shelters,” said Meredith Vieira, who emceed the event but would say nothing regarding speculation of her leaving as co-host of NBC’s “Today” show.

A WIN graduate, Monique Warden recounted living in stairwells at times until finally finding a WIN shelter. “There was a warm, caring real sense of community.” She’s moved on in life and soon will be starting her own business, Sassy Sugarswirl Inc., a makeup artist company, thanks to WIN’s support.