Fila certainly got its money’s worth from its tennis star, U.S. Open champ Kim Clijsters. 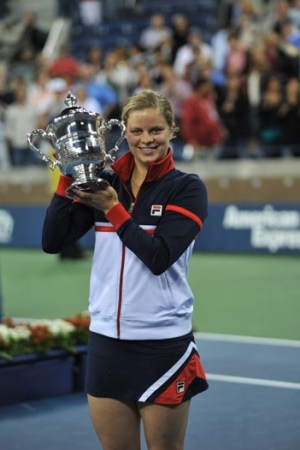 WIN FOR FILA: Fila certainly got its money’s worth from its tennis star, U.S. Open champ Kim Clijsters. The 26-year-old Belgian tennis player, who came out of retirement a month ago, has been wearing Fila tennis outfits in tournaments for years.

“It’s a win for Kim and also a win for working moms,” said a Fila spokeswoman. Clijsters, who wore Fila’s iconic red, white and navy sleeved top and matching skirt from the fall 2009 women’s Heritage collection, and has a preference for sleeved models over tanks and racer backs, already has met with Fila’s apparel team to talk about styles for next spring.

For the title, Clijsters defeated Danish player Caroline Wozniacki, 7-5, 6-3. Wozniacki was dressed in an Adidas by Stella McCartney dusty mauve dress with a multitiered skirt. “We’re bringing that [Stella] collection in for spring,” said Dana Mason, buyer for Mason’s Tennis Mart in Manhattan.

FLY LAPTOP: Vivienne Tam and Hewlett-Packard continued their collaboration this season, with Tam updating her laptop and collection with a butterfly motif. The digital “clutch” was inspired by the classic Chinese love story, “Butterfly Lovers.” It will ship in the spring. Last year’s version cost $700.

THE BEAT GOES ON: Marcel Marongiu is set to continue to design for Guy Laroche. The French designer has renewed his contract with the Parisian fashion house for another three years, WWD has learned. Marongiu became artistic director in late 2007 — the latest in a long succession of designers brought in to resuscitate the fashion house after the death of Guy Laroche in 1989. It appears that Marongiu’s linear, vaguely futuristic designs have won the backing of Guy Laroche shareholders as well as the brand’s 85 licensees.

YOUNG BLOOD: Youth culture continues to cast its spell over Hedi Slimane. Having amassed a formidable photographic archive on the subject, the former Dior Homme designer has curated a limited edition box set of 11 movies exploring the representation of youth, and the birth of counterculture, in America from the Fifties until now. The lineup includes “Mala Noche,” by Gus Van Sant; “Rebel Without a Cause,” by Nicholas Ray, and “Permanent Vacation,” by Jim Jarmusch. Dubbed “American Youth” and illustrated with photographs by Slimane, the work will be released by MK2 in November, priced at around 149 euros, or around $220 at current exchange. Slimane also is working on a book of photos from his personal archive to accompany the project, a spokeswoman said.

DOUBLE TAKE: They might have differing musical styles, but Pink and Shakira displayed similar sartorial tastes at the MTV Video Music Awards on Sunday night. The one-named artists hit the red carpet at Radio City Music Hall wearing the same black leather Balmain minidress with chain embellishments — and, taking the coincidence in stride, gamely posed together for photogs. Balmain may not be to blame for the mix-up, though: Pink told E! News that she ordered her frock herself online. And, mercifully, the overlap didn’t last too long: Pink changed into an even more revealing spandex number (which included a Lil’ Kim-esque pasty) to perform her hit “Sober” once festivities got under way.

DSQUARED, CENSORED: Dsquared’s entry into online retail is already raising eyebrows on the Internet. YouTube censored a short film featuring designers Dan and Dean Caten to promote Dsquared’s new online shop over the weekend. The nearly two-minute film depicts the identical twin brothers creating a look for Brazilian male model Jean Carlos by selecting items from their online store, which launched last week. In one scene, the designers rip off Carlos’ underpants, leaving him naked for a split second — which led YouTube to edit the frame out of the video.

Uploaded to Dsquared’s MySpace and YouTube pages, the promotional movie was viewed more than 20,000 times before the censorship. The unedited version is posted on the label’s Web site.

Dsquared’s online store is powered by Yoox Group and will sell the label’s ready-to-wear, accessories, eyewear, fragrances and a line of motorcycle helmets to 28 countries in Europe, the U.S. and Asia.

PROJECT RUNWAY: The week of spring collections will come to an end with a different kind of fashion show. On Thursday, Louis Vuitton is teaming up with Parsons The New School for Design for a live project called “Reconstruction.” Working live in the school’s Fifth Avenue windows during the day, 10 teams of two students will sketch and create actual garments by deconstructing and reconstructing historical silhouettes from Parsons’ archive and pieces from past Marc Jacobs-designed Louis Vuitton collections.

Vuitton is supplying the materials, and a panel of judges, including Costume Institute curator in charge Harold Koda, will crown the winning design, which will be unveiled that night at a cocktail reception. The winning looks may not be for sale, but they will be sported by the Noveau Classical Project music ensemble at a performance at The New School’s Tishman Auditorium on Oct.2.

IN THE BAG: Delvaux, Belgium’s version of Louis Vuitton, will be thrust into the spotlight next week at Antwerp’s MoMu fashion museum with the kickoff Sept. 17 of a six-month exhibition on the leather goods house, called “Delvaux 180 Years of Belgian Luxury.” MoMu artistic director Kaat Debo said the core of the show is a huge time line tracing different designers who’ve worked with the house since the Forties, when their names were first recorded. A replica of the firm’s Brussels atelier will unveil the complex production process behind Delvaux’s iconic Brillant bag that was introduced in the Sixties. Also on display will be a trio of bags by new artistic director Veronique Branquinho, whose first full collection will be presented Oct. 8 in Brussels. Moving on to darker subjects, MoMu’s next exhibition, slated for spring, will explore fashion’s favorite shade: black.

DIOR FROM EAST TO WEST: The Christian Dior iconic New Look suit made its first Los Angeles appearance on Wednesday as the focal point of a luncheon hosted by C magazine in the Rodeo Drive boutique. Jamie Tisch, Crystal Lourd, Katherine Ross, Liane Weintraub, Shiva Rose and Rosetta Getty were among those who stepped out to view the original haute couture suit as well as several other John Galliano interpretations of the wasp-waisted bar jacket, which Monsieur Dior fashioned for women who frequented the Plaza Athénée bar. The store was transformed into a replica of Dior’s gray-curtained atelier for the occasion. “I feel as though we’re on the Avenue Montaigne,” marveled Kathy Hilton. The house will extend its West Coast presence this fall when it partners with South Coast Plaza to bring last year’s Beijing exhibition, “Christian Dior & Chinese Artists,” to the Costa Mesa shopping center. “Christian Dior Presents Photographs by Quentin Shih,” featuring 20 of Quentin Shih’s original 22 works, will be on view from Oct. 14 to Nov. 7 as part of Carnegie Hall’s “Ancient Paths, Modern Voices” bicoastal music festival taking place at Segerstrom Center for the Arts.