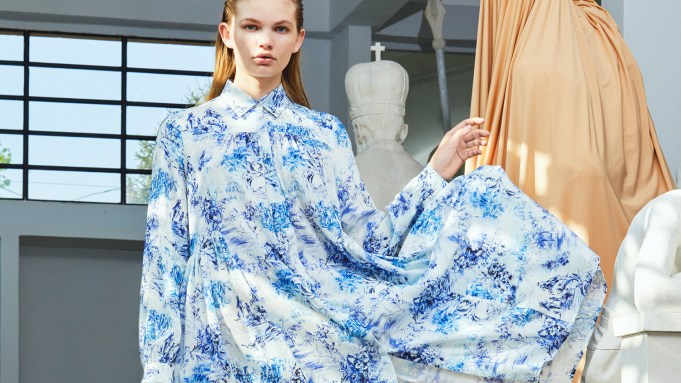 JOOP’S NEW LOOKS: Wolfgang Joop has a new look. Or make that “Looks” as the German designer’s new contemporary collection is called.

Fans of “Germany’s Next Top Model” got the first glimpse of Looks on the show’s finale late Thursday night, and the spring 2017 collection was immediately available for purchase online at looks.de following the program. On Friday, the collection’s exclusive retail partner Breuninger premiered the range in the specialty store’s Düsseldorf and Stuttgart doors.

Joop, who was a juror on “Germany’s Next Top Model” last season, said his experience on the show influenced his decision to start this new fashion project. “I used to be considered some sort of diva, but since I did Heidi, I somehow became a star among TV audiences. Yet there I was with this huge market and nothing to sell them.”

His high-end collection, Wunderkind, is now going into its 14th year. While he noted Wunderkind “has a bigger crowd now…the sad fact is that a lot of the women who love it, especially younger women, can’t afford it at full price. We will keep Wunderkind as couture,” he continued, “but with Looks we can now also inspire and feed the larger market.”

“People ask why I’m doing this, and sure I could retire, write a book, or paint. But I’m surrounded by young people, and young people are hungry for fashion,” the designer told WWD. “With Looks we’re moving into a new time, using bloggers, influencers, the net — all these different ways of selling and creating. I want to be in this new kind of business.”