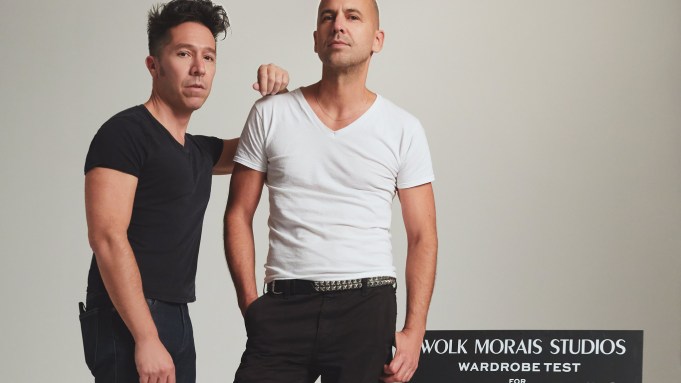 “Our favorite look is not here because it’s with Cate Blanchett,” says Brian Wolk during a walk-through of his new Wolk Morais collection designed with Claude Morais, at the duo’s Hollywood bungalow home-studio.

“We’ve been using Los Angeles as our muse, backdrop and scenic inspiration and we felt it was time to speak the language of the city,” says Wolk, referencing previous collections, one shown at Hollywood’s historic Yamashiro Japanese restaurant, another inspired by California’s mid-century “California Cool” art movement, another by its private school-going “teenage bourgeoisie.” “Also, it was really fun to cast…we got to call all of our crazy eccentric friends and get them to participate,” he said of the short film’s lineup of Lydia Hearst, Moon Unit Zappa, Aimee Garcia, Rebecca Walker, Monica Abanonu and more.

While many may associate Los Angeles fashion with streetwear or rock ‘n’ roll, the Wolk Morais designers have been zeroing in on tailoring as a specialty, cultivating a celebrity clientele with the help of their stylist/collaborator Elizabeth Stewart, that includes Jessica Chastain, Janelle Monáe, Julia Roberts and more.

“L.A. has such a strong tradition of tailoring in film with Adrian and Orry-Kelly, it’s so much a part of the DNA. Saint Laurent would design whole collections inspired by Hollywood costume design,” Wolk says. “The return of the suit is super interesting to us and seeing young girls dress up again is really inspiring.”

The collection is grounded in tailored pieces in soft brushed cashmere and fresh-looking pastels that managed to look polished but easy, including Blanchett’s heather gray double-breasted tuxedo jumpsuit. There are double-breasted boyfriend blazers aplenty, with an easy drape and covered buttons, worn with fluid trousers styled with white leather belts and shoes for a contemporary edge. (The designers are also pushing the styles as being unisex — “we sent something to Ansel Elgort,” Morais offers.)

A shorter, pale pink jacket shaped by waist darts à la 1Forties Adrian is matched with a pink micro-dot jacquard ruffle minidress. Also on the femme side, a green taffeta sleeveless blouse with exploding ruffles at the shoulders, tucked into Katharine Hepburn’s heather green twill trousers. Adding a bit of surf-hippie Venice Boardwalk style, the two used psychedelic wax cotton prints on a tailored suit and a ladylike double-tiered dress that are crazy-elegant. Priced from $595 for blouses to $1,495 for suits, the collection is produced in L.A., and sold via the designers’ web site and wholesale partners, including Fred Segal.

“We are interested in the tribes of L.A., and how you can live three miles away from someone here and have a completely different life,” Wolk says of adding a bit of counterculture to the mix. “It was how do you connect these different tribes and for us, it was through the clothing and screen tests we shot.”

The movie buffs say they have watched their share of vintage screen tests, too. “It’s such a weird, quirky Los Angeles thing. And it’s strangely so connected visually to social media where you have text and images on the screen together. It’s like the first Instagram,” Wolk says. To add another layer, they asked all 29 of their subjects at the shoot what they love about Los Angeles, and the answers will be fodder for the designers’ own Instagram Stories.

Elizabeth Stewart styled the film, Sandro Supping directed it and Shelby Goldstein did the still photography. The designers, who supplement their income with beauty and fashion brand consulting, say they plan to take the film on the road to sell the collection during market weeks in New York and London, and to submit the film to festivals in La Jolla and Paris.

While working in fashion in L.A. has its challenges (the two designed Ruffian in New York before moving West in 2014), they are still inspired by the city — and its easy access to celebrity. “Generally it helps.…Our e-mails get fuller of requests,” Morais said of the halo effect of dressing stars. “It also opens doorways into different markets. It will be interesting to see what happens when we take this on the road.”