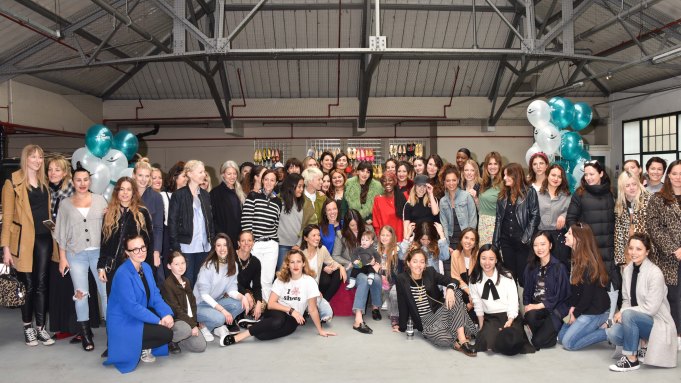 DESIGNER DOLLARS: “The mood has been excellent,” said Charlotte Olympia Dellal, the founder and owner of footwear firm Charlotte Olympia, referring to the designer car boot sale in London’s Soho on Saturday. “It’s a fun day out, and we love seeing all the women getting excited for shoes as women do. I love that this is all going to charity,” added Dellal, who is an ambassador for Women for Women International U.K. The nonprofit humanitarian organization aims to provide financial and educational support to women survivors conflict and poverty.

Charlotte Olympia, Edeline Lee and Temperley London were among the number of British and international labels that sold clothing, beauty items and artwork for the second Women for Women charity car boot sale — similar to a garage sale — that took place in London’s Soho. The event has raised more than 150,000 pounds, or $194,009, so far, with the rest of the items to be listed on eBay May 15. Every item sold will go toward the charity organization’s work in helping women survivors of conflict.

Hosted by Alex Eagle’s The Store and The Vinyl Factory’s Brewer Street Car Park, the latest edition of the sale spanned two floors. Cars were parked in the lot with trunks open and filled with donated wares, while stalls featured racks or bins with designer finds. More than 1,000 shoppers attended the event throughout the day, looking for bargains or take selfies with designers.

“The energy has been so hyperactive,” Eagle said. “Everyone has given so much stuff. I really learned last year that it felt so good clearing your wardrobe and getting rid of stuff. Nicholas Kirkwood gave us some shoes which is fabulous. Charlotte Olympia is incredible. Noor Fares gave us a Chanel bag. I saw bits of Céline, Chanel and Balenciaga. It’s really a bargain. Old bits of Levi’s denim, Converse trainers are going to these women, who are actually working to help women to rebuild their lives.”

Meanwhile, Lee said she has been working with the charity for a number of years. The designer was poised at her stall dressed in a 60 pounds, or $70, T-shirt that she designed for the cause. It featured her signature bubble jacquard fabric fashioned as a bow. “I was here for last year’s car boot sale. This year we’ve designed an exclusive T-shirt. I did a scarf collection for them last year. I just find that it’s a way to give something back to causes dear to my heart.”