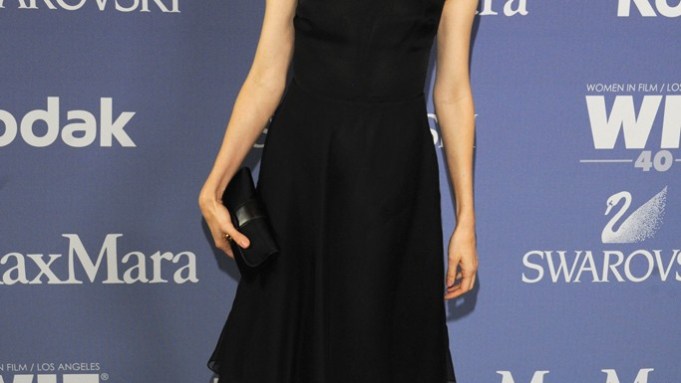 “They say that 40 is the new fabulous,” said Jenna Elfman, who hosted Women in Film’s Crystal + Lucy Awards, sponsored by Max Mara and Swarovski, Wednesday night at the Beverly Hilton, where the organization feted its 40th anniversary. The evening kicked off by honoring the youthful Hailee Steinfeld, who drew laughs when she began her speech with, “Back when I was a little girl…” The 16-year-old wisely kept it short and sweet to make room for others on the program, including cinematographer Rachel Morrison, the Kodak Vision Award honoree, and the evening’s lone male honoree, George Lucas, who received the Norma Zarky Humanitarian Award for championing children, veterans and, of course, women.

“I actually prefer being surrounded by women,” he said. “I think they’ll run more than 50 percent of the world before I’m gone.”

The usually less-than-verbose Sofia Coppola topped all of her previous speech times by speaking for a full minute.

“I’m proud to have a body of work now that reflects my point of view, and I hope this award will encourage other women to express themselves,” she said, also poking fun at Lucas for being in the minority that evening.

Laura Linney, who received this year’s Crystal Award for Excellence in Film, called herself a late bloomer, by Hollywood standards anyway, having grown up in the New York theater world.

“Film was a world which intimidated me greatly,” she said, “but on the wise advice of my agent, I dipped my toes in slowly, and I realized there would have to be room in my life for two loves, so I gave myself permission to be a film-theater bigamist.”

Holly Hunter, presenting the Lucy Award for Excellence in Television to the female cast of “Mad Men” — January Jones, Christina Hendricks, Elisabeth Moss, Jessica Paré and Kiernan Shipka — quipped, “Without these women the men on the show would just be a bunch of desperate masturbators in great suits.”

The previous night, Women in Film’s annual preshow fete, hosted by Max Mara’s Nicola Maramotti and W magazine, took place at the Beverly Hills Hotel’s Polo Lounge, which Steinfeld declared “so Old Hollywood.” Most of the guests who crowded into the legendary restaurant and tree-lined patio were new guard, including Mary Elizabeth Winstead, Sophia Bush, Ahna O’Reilly, Ashley Madekwe, Angela Lindvall, Amandla Stenberg and Shipka. A few dished on their work schedules for the summer.

Steinfeld was heading to Romania to film “The Keeping Room” with Sam Worthington and Brit Marling, while Olivia Munn was headed to New York to star in a film for Jerry Bruckheimer.

“He actually handpicked all the actors, which is a first for me,” Munn said. “It’s proof that if you keep your head down and work hard, people will take notice.”