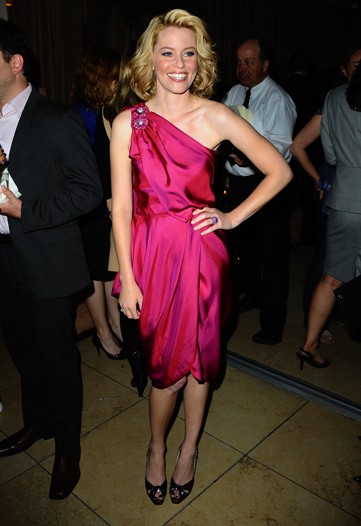 SCREEN SIRENS: “It’s the only job I know how to do, so I’m not going anywhere anytime soon,” said Elizabeth Banks, the guest of honor at Women in Film’s annual cocktail party at the Sunset Tower hotel Wednesday night. “This is a fun party, but I wouldn’t expect anything less from Elizabeth. She’s a fun girl,” said pal Jenna Fischer. But there was no shortage of other actresses in the room, including Jeanne Tripplehorn, Elizabeth Reaser, Busy Philipps and Kiele Sanchez. This being an industry party, of course, most guests couldn’t help but dish about their upcoming projects. Banks just wrote a script and is set to produce her first film, starring Bruce Willis (untitled as of yet). And Fischer will spend the next five weeks in New York filming the indie drama “A Little Help.” “It’ll be a chance to do a noncomedy, so I’m excited,” she said. Sanchez, there with her husband, screenwriter Zach Helm, is trying her hand at screenwriting. “It’s been a learning experience,” she said. “Mostly I write things down on scraps of paper and hand them to Zach, who has a pile of nice, neat notebooks.”