Stefani Greenfield told the crowd that if she had to narrow down the one project that’s been most inspirational to her, it would be JonesWorks. 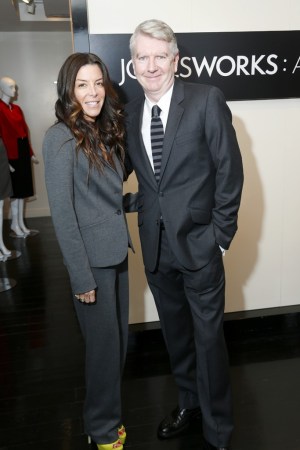 Cher, Grimes, Normani and Other Stars Tapped for 2022 Pirelli Calendar

WORKING LUNCH: Jones Group Inc. executives welcomed the media and retailers to its showroom Tuesday for a lunch to show off its latest initiative: JonesWorks, a “mix and match” style system geared to the working woman. “They made it into a no-brainer,” said Adam Glassman, creative director of O, The Oprah Magazine, viewing the stylish mannequins on display. “It’s hard to find people on the selling floor to explain it to you, and this is very simple.”

Stefani Greenfield, chief creative officer of Jones, told the crowd that if she had to narrow down the one project that’s been most inspirational to her, it would be JonesWorks. “The business started getting a little erratic and we were chasing the fashion customer. The business had a bit of a hiccup and we had to go into our consumers’ lives,” she said. Jones held focus groups around the country, asking women specifically what they were looking for from Jones. “They told us classy, classic, sophisticated and simple,” she said. They also wanted to know how to put it together. She quoted John Demsey, group president at the Estée Lauder Cos. Inc., who sits on the Jones board, who described the concept as, “It’s a Build-a-Bear.”

Richard Dickson, president and chief executive officer of branded businesses at Jones, admitted that their customer had aged and the brand had gone off into too many directions. “We lost our plot, truth be told. To ignite growth we had to go back to our roots and what made us great. We needed to make it relevant to today and tomorrow,” he said.

RELATED STORY: Jones Aims to Get Sportswear Back on Track >>