Building on the interest in the World Cup winning American team, Nike aims to tell a larger and ongoing story about women's empowerment.

By Rosemary Feitelberg and Jean E. Palmieri on July 8, 2019

As for specific sales, U.S. women’s national team merchandise has been record-setting since the team’s victory on Sunday, according to Fanatics, the world’s largest retailer of licensed sports merchandise. This team’s product is the top-selling U.S. soccer national team — men’s or women’s — of all-time. In fact, more USWNT championship merchandise was sold in the first hour — 200 percent more merchandise — after the clinch than the entire first day following the U.S. women’s win in 2015. Sales were 500 percent higher for the first day this year versus four years ago. And Fanatics sold more USWNT Championship merchandise Sunday than the 2015 champions sold for the entire month after their win.

Nearly 80 percent of sales immediately after the win came from mobile devices, Fanatics said. The top-selling item this time around is the podium T-shirt, which commemorates the win. It says “World Champions 2019” with one star on top and three on the bottom, the Team USA logo and the Nike swoosh. Nike created the team’s home and away uniforms for the tournament as well as off-the-field looks. The top-selling player’s jersey is Rapinoe’s, the 34-year-old who kicked the winning goal and was named series MVP and whose eight goals also helped her win the Golden Boot as the tournament’s top scorer. 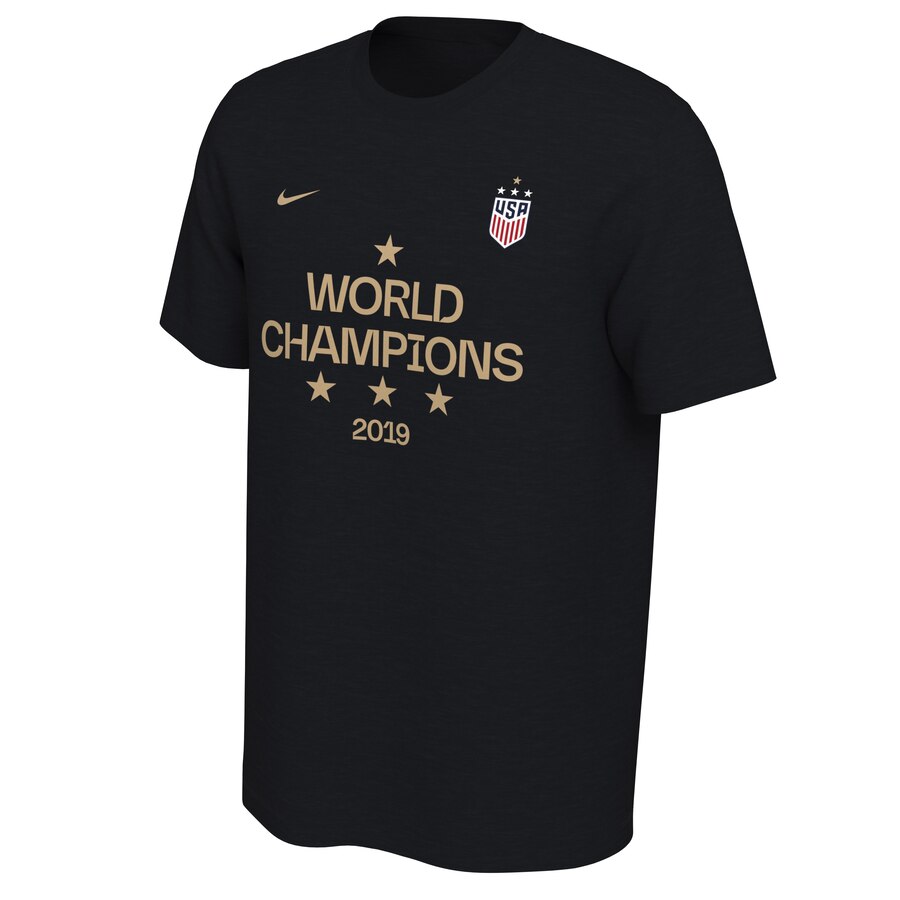 Nike’s women’s World Cup podium shirt has been a bestseller for Fanatics.

“The record-setting response we’ve seen from fans in search of U.S. Women’s National Team merchandise has been amazing,” said Jack Boyle, Fanatics’ co-president of direct-to-consumer retail. “Seeing the high demand throughout the tournament, we launched more than 100 World Cup championship products across women’s, men’s and kids’ categories as soon as the final whistle blew on Sunday, and this team has already sold more merchandise than the 2015 champions sold in the entire month after their title.”

Sunday’s showdown in Lyon, France, between the American team and their orange-shirted rivals from The Netherlands was the most-viewed women’s match of all time. Coinciding with the momentum of women’s empowerment, inclusion and individualism that has swept through various countries, the American team’s popularity has taken hold. Twenty years after Mia Hamm and Brandi Chastian forged the U.S. team’s first women’s World Cup victory, their successors are trying to leverage this summer’s win in a myriad of directions far beyond selling Nike soccer jerseys.

Each player is reportedly expected to take home $250,000 in payments separate from any contract-mandated bonuses or endorsement deals. The American team will be touted Wednesday morning with a ticker-tape parade in lower Manhattan, thanks to approval by New York City Mayor Bill de Blasio. A City Hall ceremony honoring the U.S. women’s team will cap off the festivities. But their time in the spotlight won’t be limited to confetti-strewn celebrations, according to an assortment of industry observers. Fans chanting “Equal pay!” was just another indication of the public’s interest in the women’s team’s lawsuit against the U.S. Soccer Federation.

Rick Burton, the David B. Falk Endowed Professor of Sport Management at Syracuse University, said, “The women of ’19 were all standing on the shoulders of the 99ers — the Brandi Chastain and Mia Hamm team. A much greater blow for equality may have been struck, as the U.S. men’s team were losing to Mexico and continually not getting it done on the world stage, the U.S. women were. The lawsuit gained a lot of fuel and it would be a wonderful lawsuit for the women to win, and a lawsuit that shouldn’t be based on TV ratings. It should be won on the grounds of what these women mean for America and achieve on a regular basis, which is so much more so than the men. Even if the men by the nature of the tournament they play bring in more money. There is a distinct difference what FIFA plays a men’s tournament versus a women’s.”

Burton described the team’s message of not just equal pay, but “equal everything.” He added, “In a time when we are all divided, there was this great unifying statement of we should be really thankful about how good these women are, we should really be treating them as we treat our men.”

Approaching the 50th anniversary of Title IV, federal legislation that secured equality in federally funded college and university sports, this generation of female athletes has a totally different outlook than their predecessors. With that in mind, as well as their media savviness, the U.S. players have messages to share, according to Mary Jo Kane, director of the Tucker Center for Research on Girls & Women in Sport.

She said, “For the first time in our history young women grow up with a sense of entitlement to sports. These women say. ‘We own it. This is ours. We fit. We deserve it.’ You saw that throughout the World Cup. They trolled their critics. They never backed down. And most important of all they delivered — they backed it up by winning. Had they lost it would have never had the [same] impact, because America loves a winner, America loves a champion and America especially loves a champion on the biggest stage with the biggest spotlight with all the pressure in the world.”

Nomura Instinet managing director Simeon Siegel said, “At the end of the day every individual sporting event is both critical to Nike and irrelevant to Nike. Consumers don’t sit still. All wins and all news ends up being yesterday’s news as soon as there is something else to cheer for. The reality is as the women’s team creates and solidifies its dynasty, they will have staying power. There are certain athletes who transcend their individual games. Jordan has his own brand. People remember Jordan but the sales are not driven by a specific game.

“Athletic brands need to stay relevant, be in the news and convince the consumer that by simply by associating with the product they will be better. That is best told in stories,” Siegel said. “Nike is in addition to the largest [athletic] brand of all time is also one of the most powerful marketing agencies of all time. The ability to tell their stories is deeply entwined with their ability to sell shoes.”

Rapinoe, Morgan, Lavelle and Harris could be the main stars for future endorsements, according to Burton. Meanwhile, Nike celebrated Sunday’s win with a marketing blitz fueled by social media posts, an inspirational commercial and a full-page ad in The New York Times among other efforts. Like the players themselves, Nike’s advertising efforts are blasting magnified confidence with such messages as, “Underdogs showing up big dogs” and “ And standing your ground.”

A Nike spokesman declined to pinpoint any World Cup merchandise bestsellers and how its site traffic was affected after the U.S. team’s win. He also declined to comment regarding whether any signature apparel is in the works or if any of the players have signed endorsement deals. There was also no word regarding whether Nike was planning any special events solely for the team. Nike will indubitably be well-represented Wednesday morning along the parade route in New York City.

As for the activism undercurrent in Nike’s marketing, Burton described that as “healthy,” making the point that for decades athletes have been finding issues that they can leverage their success to make a statement. Just last week following the recommendation of brand ambassador Colin Kaepearnick, Nike made a last-minute decision to yank Air Max 1 USA sneakers — imprinted with the Betsy Ross American flag — from store shelves.

As for the American soccer plays’ activism, Burton said, “These things ebb and flow and we may have less visibility for the women’s World Cup players. We may switch our attention to Wimbledon, golf, baseball or e-sports, but there will continue to be activism. It is of this age because of social media – there are so many platforms for people to make statements. I think activism is here to stay.…The question is who is next? Who has to now fight the next battle or carry this to the next level? The women’s soccer players have largely done their job. I don’t think you could have asked them to do more.”

Wedbush analyst Christopher Svezia cited how Nike’s women’s business saw a double-digit increase and outpaced the men’s business for the past six months of the last fiscal year, which ended in May. Nike’s women’s initiative is far from a new venture, but there has been an acceleration as of late, thanks to such apparel categories as sports bras, a large-size line, brand Jordan merchandise, as well as Nike’s marketing and footwear initiatives, he said. “Any way they can leverage some of the benefits from this event bolsters what they are already doing on the women’s side of the business,” Svezia said. “I think it’s positive any way that you look at it.”