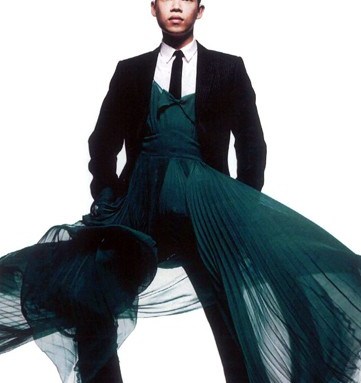 PRIZE PORTRAITS: For this year’s CFDA Journal, Diane von Furstenberg’s only marching orders for creative director Trey Laird were “Capture fashion — do something fabulous.” So instead of using models to showcase the designers’ work, he decided it would be best to have the nominees shot sporting their own creations, which had not been done before. Photographer Craig McDean and stylist Karl Templer helped to ensure none of the 21 subjects would wind up with a standard head-and-shoulders shot. International award winner Marc Jacobs, who will be honored for his work for Louis Vuitton, donned the floppy rabbit ears he created. Proenza Schouler’s Jack McCollough and Lazaro Hernandez, who are in the running for Accessory Designer of the Year, wore their handbags as if they were boxing gloves. More daring is the image of Swarovski women’s wear designer contender Jason Wu standing proudly in an emerald green evening gown over a gray suit. Inspired by Wu’s understated graceful dresses, Laird envisioned him as a bit like Fred Astaire, “but his Ginger Rogers is his creation.” Gucci Westman handled makeup, Didier Malige and Bryan Bantry worked on hair and David Colman wrote the accompanying text in real time during the shoot at Milk Studios.

EN POINTE: The Martha Graham School of Contemporary Dance will honor Lela Rose June 11 at its annual luncheon at the Loeb Boathouse in Central Park. “We were looking for a dynamic artist that recognizes what a vital role arts, fashion and culture play in our community, and embraces their ability to express their creativity and to define their humanity,” a spokeswoman said.

HIGH LIFE: The High Line park project, due to open this month, is already shaping up to be a favorite among fashion types. Following last year’s 40th anniversary bash there, Calvin Klein Inc. is now planning an encore of sorts. On June 15, Calvin Klein Collection will host the official after party for the High Line’s Opening Summer Benefit Gala. Dubbed “First Party on the High Line,” the post-party will take place within the first section of the High Line to open, between Gansevoort and 20th Streets. “The High Line is the most important new public space in Manhattan, and a visionary, contemporary concept for a park,” said Malcolm Carfrae, CKI’s executive vice president, global communications. “We are proud to continue the association we started with the High Line for our 40th anniversary last year and celebrate the opening with this first party on the newly finished park.” The after party is in support of Friends of the High Line, and proceeds will go to the operations and maintenance of the park.

While this is a post-bash to the benefit at Chelsea Piers, which is honoring Lisa Maria and Philip Falcone and Edward Norton, it is likely to feature a heavy fashion turnout. It’s also the night of the 2009 CFDA Awards, and honorees and nominees, including Calvin Klein Collection’s Italo Zucchelli, who is nominated for the Menswear Designer of the Year category, are expected to trek down from Alice Tully Hall. Even CFDA president Diane von Furstenberg could make an appearance at the after party, as she and her husband, Barry Diller, appear to be big fans of the High Line project. The New York Times’ Web site reported on Monday that the duo is making a $10 million donation to the High Line.

AT HOME WITH STELLA: Eco-conscious designer Stella McCartney will host a premiere screening of Yann-Arthus Bertrand’s film “Home” at her Beverly Boulevard boutique on Friday, World Environment Day, with a host committee of Charlize Theron and Stuart Townsend, Anjelica Huston, Jessica Capshaw, Rosario Dawson, Emily Deschanel and Amber Valletta. The film will be the first to be released on the same day in more than 50 countries. As with previous screenings, the store’s spacious back patio will be transformed into a green garden for guests including Rosanna Arquette, Amanda De Cadenet, Saffron Burrows, Joy Bryant and Jaime King.

READ ALL ABOUT IT: Should any major news break Thursday night, Diane von Furstenberg’s showroom may be the go-to place for analysis. Claire Shipman of “Good Morning America” and BBC News’ Katty Kay will be the guests of honor in celebration of their new Random House book, “Womenomics.” Diane Sawyer already has given it her seal of approval. Charlie Rose, Katie Couric, Charlie Gibson and Robin Roberts are among the media types expected, and the two D.C.-based reporter-authors will no doubt reel in plenty of other press-corps colleagues and pals.

FOUR TO THE FLOOR: If you’d happened by the Rex movie theater in Paris Thursday night, you might have wondered why so many fashion and social types — Lee Radziwill, Princess Gloria von Thurn und Taxis, Reinaldo Herrera — were turning up for the premiere of the summer blockbuster “Terminator Salvation.” Credit Vanity Fair scribe Bob Colacello, who, after the screening, drew the swell Euro set, along with “Terminator” star Christian Bale and director McG, to a late dinner at Maxim’s. Colacello has just signed a first-look deal with the film’s producers, Victor Kubicek and Derek Anderson, and at the dinner, Kubicek revealed that their first project likely will be a film about William Buckley. Meanwhile, Radziwill, seated between Herrera and Calvin Klein, gave a positive review to “T4” — “Nonstop action. Thumbs-up, absolutely!” — while admitting that she’d somehow missed T1, T2 and T3.