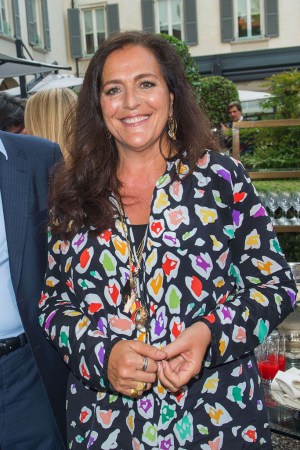 The cloistered garden of the Four Season Hotel in Milan was the site of WWD’s party Friday to mark the beginning of Men’s Fashion Week, as well as the debut of the latest weekly issue. “Nuns used to grow herbs here,” said Umberto Angeloni, chairman and chief executive officer of Caruso, referring to the former 15th-century convent. Gian Giacomo Ferraris, ceo of Versace, a neighbor of the hotel on Via Gesù — now dubbed the Via dell’Uomo, or “The street of men’s wear” — was also enjoying a brief break ahead of the brand’s show Saturday with Luigi Cantone, Versace’s ceo of the Europe, Middle East and Africa region and business development director. Kean Etro made it a family affair, bringing along his children and his wife Constanza Cavalli, who said there will be another edition of the Fashion Film Festival Milano in September.