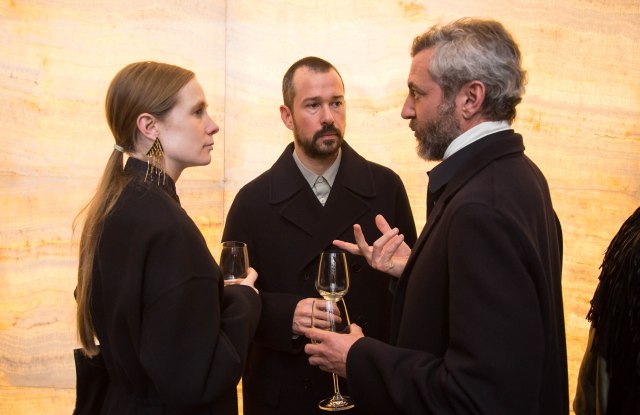 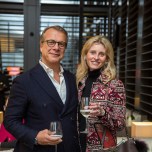 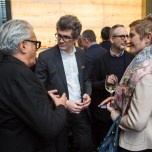 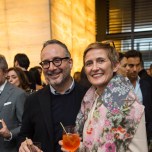 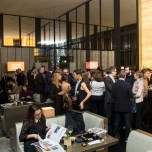 Designers and industry executives gathered together Friday night to celebrate Milan Fashion Week with WWD at a cocktail party hosted at the Armani Bamboo Bar.

While glasses of white wine and the Italian signature Spritz cocktails were served, along with creative canapés, at the event sponsored by The Palmeraie luxury complex in Scottsdale, Ariz., the designers at the event discussed their fashion week fatigue.

“We’re leaving this week for Canada, we need a little break after having had three shows from January,” said Luke Meier, who attended the event with Lucie Meier, his wife and co-creative director at Jil Sander.

Marco de Vincenzo came straight from his show. “I think that this collection really represents myself and what I like mostly,” he said of his lineup, which marked his first 10 years in the business and included his favorite fabrics.

Nicolò Beretta didn’t present the collection he designed for L’Autre Chose during fashion week, but he’s busy working on his new capsule collection for the brand, which will be unveiled in March.

Other designers at the event included Carolina Cucinelli, the daughter of Brunello Cucinelli who is in charge of the women’s collections; Giuseppe Zanotti; Sara Battaglia; Efisio Marras, and Racine Carrée’s founder Viviana Vignola, among others.

Taking a quick break from the busy night ahead of the brand’s show scheduled for the following morning, Salvatore Ferragamo’s chief executive officer Micaela Le Divelec Lemmi stopped by with chief marketing officer Riccardo Vannetti. “We are going back to the office to work after this but we’re happy, there’s a new good energy,” Le Divelec Lemmi said.

“The stress and the fatigue hit you the day after,” said Mario Filippi Coccetta, cofounder and president of Fabiana Filippi, which presented its collection on Thursday.

“Italian fashion is amazing,” said Hanna Struever, principal of Retail Portfolio Solutions, who has been hired by The Palmeraie developer Five Star Development to bring in luxury merchants, dining venues and special experiences.

She might take cues from the city, as she proved to have a soft spot for Milan. “If you look at the energy that’s in Milan right now, it is on fire. I don’t think it has ever had a better moment — the stores, the restaurants, the vibe. I think the world Expo [in 2015] gave Milan an excuse to freshen up and the city far exceeded anybody’s expectations.…It’s the place to be.”