Attire the Studio, now in its second season, aims to be GOTS-certified and refuses to be yet another influencer brand.

Courtesy of Attire The Studio

PARIS — When business school graduate and street-style darling Xenia Adonts decided to launch a transparent and sustainable brand, she thought it would be a matter of finding the right production partners and materials. The former was easy enough. The latter proved to be trickier. Certified sustainable fabrics were one thing but the devil was, as ever, in details such as threads and trims.

Take the shoulder pad. Having decided to avoid all synthetics, Adonts reached out to suppliers for polyester-free options. “The problem with sustainability is that there is no definition, no official regulation. I was told that what I want isn’t out there yet and I had to be patient. But if I accepted that, I’d be just like every other company and there will never be change,” she said. When supplier composition proved unreliable, she and her team ended up testing the composition of shoulder pads by setting samples on fire to determine what they were made of: Natural fibers tend to burn into fine ash, while synthetics give off an acrid chemical smell and melt down into hard beads. Eventually, the Tencel and organic cotton version that’s now used in the brand’s jackets and coats was found.

Launched last fall, Attire the Studio is self-funded and focuses on the kind of toothsome garments that can just as easily land you in They Are Wearing snaps as become personal staples. At the creative helm are Adonts and executive designer Carmela Osorio Lugo, a SCAD alum who has worked at Raf-era Calvin Klein and Ralph Lauren. The pair were introduced over Instagram and connected over their desire to contribute to a more sustainable industry, without making their work unaffordable.

Style-wise, Attire the Studio is about pared-back shapes with eye-catching details. Its second season offers 13 handsome designs in Scandi-cool tones of browns, blues and the odd pop of yellow. Knitwear hits the spot between casual and elegant; tailored separates are just that touch oversize to give the silhouette a relaxed yet upscale vibe; a camisole shape has that Instagram-happy cool girl mien. The coat’s broad volumes brought out the discrete flecking created by undyed wool’s naturally occurring variations.

Positioned as contemporary, the brand chose a direct-to-consumer model to stay competitive. A cold-shoulder sweater is 180 euros, a pair of trousers around 260 euros, while a jacket or a wool coat with a stately shoulder line would set you back respectively 385 and 520 euros. Costs are broken down and displayed on each item page — also accessible on garments through a QR code printed on the care label — to adhere to the brand’s transparency pledge.

Despite the challenges of the current global situation, Adonts remains confident in the slow and steady path. Within the next couple of months, the brand is looking to get its GOTS certification, and to launch Iconic Attire, a selection of core styles. For now, outside investors and wholesale business remain off the cards. Business is growing steadily, relying on the German entrepreneur’s 1.5 million strong community and word-of-mouth. Key styles from the second drop, launched on the first day of Paris Fashion Week, have already sold out.

But this early success has already attracted unwanted attention. Over the summer, fast-fashion copies of key styles cropped up. But the team are taking it in stride. “If there’s something anyone copies from us, it should be our sustainable approach,” Osorio Lugo said. 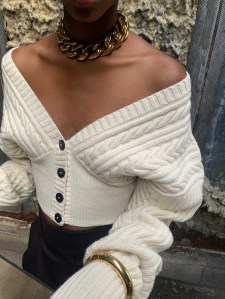 A look from Attire the Studio second collection.  Courtesy of Attire The Studio