Yeohlee now has Lord & Taylor’s store windows touting her “Made in NYC” efforts. 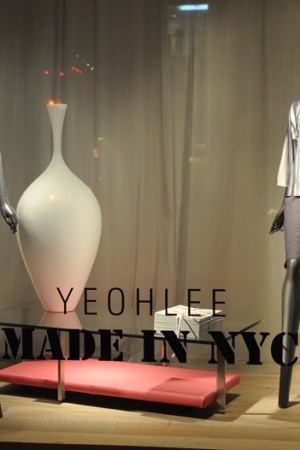 BUY LOCAL: While speculation abounds about the likelihood of a spike in domestic manufacturing, Yeohlee is already doing what she can to help prop up the Garment Center. Aside from producing her collection in New York and publicly talking up the need for more companies to do so, she now has Lord & Taylor’s store windows touting her “Made in NYC” efforts. The designer said, “The store is aware of my interest in protecting the future of the fashion industry, and they have a history of supporting American design.” And Made in America means something, “particularly now when there seems to be a sensitivity with consumers. It is being noticed beyond our industry,” Yeohlee said.

PREP RALLY: Julia Roberts — and several other celebrities — were evidently thinking in pink and green last week. Roberts popped by Lilly Pulitzer’s Upper East Side flagship Wednesday morning, buying a $295 vintage Lilly (a multicolored, floor-length jersey number from the Seventies) for herself and a pink hair bow for daughter Hazel. Téa Leoni stopped in that afternoon, purchasing several bathing suits for an upcoming trip. Elisabeth Hasselbeck — who has designed matching Mommy-and-me tunic dresses for herself and her daughter Grace and matching shorts for son Taylor for Pulitzer’s upcoming A Colorful Cause line (out in April) — stopped by Friday, spending two hours. Hasselbeck snapped up 30 items, including the Briere floor-length silk dress for an upcoming wedding in Florida (plus a matching version for daughter Grace and a pink-and-green tie for husband Tim), elephant-adorned ballet flats in pink and navy, multiple dresses for herself and her daughter, an ocean-coral-themed Hayward tunic from the brand’s Jubilee anniversary resort collection and a Lilly-themed Monopoly game. And not to forget the Upper East Siders who are the brand’s bread and butter: camera crews from Bravo filmed the store Thursday for their “Gossip Girl”-like reality series (which sources say is called “NY Prep”) due this fall.

WHITE NIGHT: Munich was a vision in white on Thursday, thanks to the double opening of the first Maison Martin Margiela German flagship and Margiela retrospective, which has moved from Antwerp into the Haus der Kunst through June 1. Eight white rickshaws and 10 white bikes ferried guests from the new shop on Maximilian Strasse to the art museum, while those who preferred to walk had only to follow the white Tabi toe-sock footprints and white helium balloons pointing the way. Mother Nature also got into the act, unexpectedly sending down thick white snowflakes to mark the event. The 3,000-square-foot store at Maximilian Strasse 34 is the 16th Margiela unit in the world. Housed in a former Italian restaurant, the molded ceiling on the ground floor is original, and the tiles of the former kitchen in the basement have been integrated into the decor. Maison Martin Margiela’s previous Paris premises provided doors, stucco and cornicing, which have been set onto the basement’s bare walls. As for the show, it’s set for a third stop at the Tokyo Opera City Art Gallery.

BEING SELECTIVE: Until now, the cozy Hemingway bar, its renowned bartender Colin Field and his famous cocktails owned the limelight of the Ritz hotel in Paris. But the newly revamped Ritz Bar — located right across from the Hemingway — is rocking and tuning up to modern times. On Thursdays, the coolest Paris DJs shake the Baroque decor with electro. The likes of author Frédéric Beigbeder, Ariel Wizman (who also does the music for Lanvin shows) and actress Emma de Caunes are slated to perform soon.