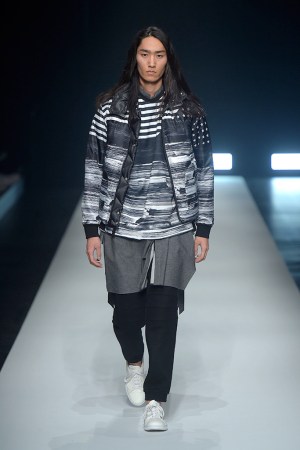 Yoshio Kubo, a Japanese men’s wear designer whose namesake brand has become one of the most talked-about labels of Tokyo Fashion Week, has decided to change the timing of his runway show in order to better fit the international calendar. His spring fashion show will be held July 20 at Tokyo’s Chichibunomiya Rugby Stadium. Meanwhile, Tokyo Fashion Week is slated for Oct. 17-22.

A spokesman for Kubo, whom WWD profiled in 2014, said the decision was made as a first step toward eventually showing the collections outside of Japan.

For several seasons, Kubo has held an exhibition in Paris, timed to coincide with that city’s men’s fashion week. Following this, he would also hold an exhibition in Tokyo for Japanese buyers, but his runway shows didn’t happen until some three months later when Tokyo’s fashion week rolled around. His spokesperson said that staging his show between his Paris and Tokyo exhibitions, as he will do starting from the spring 2017 season, has the added benefit of allowing Japanese buyers to see the pieces on models before placing their orders.