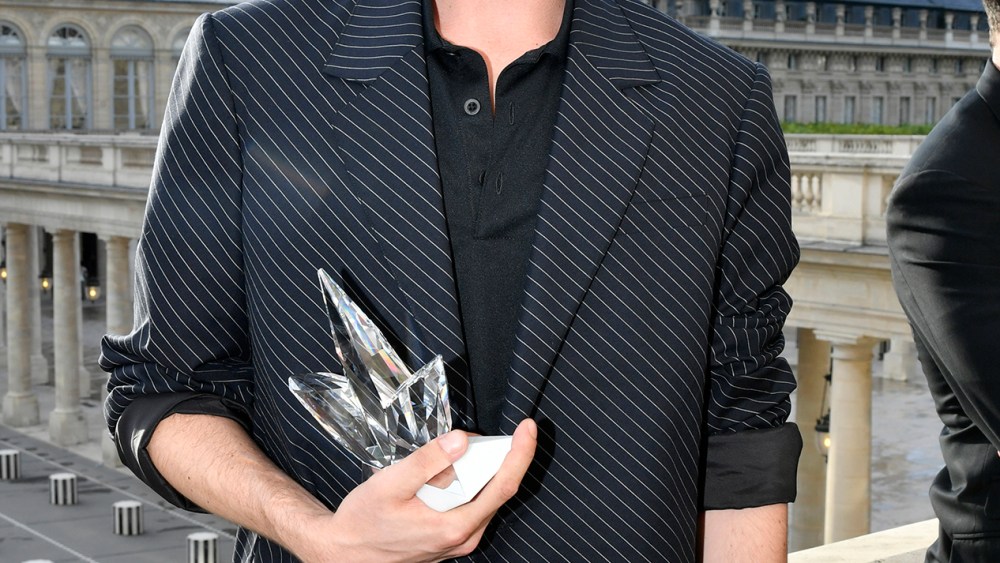 Y OH Y: Y/Project’s rising star just ascended a notch higher with the buzzy label — a key player in Paris’ new guard — scooping the 2017 ANDAM Grand Prize at a ceremony at the French Ministry of Culture here Friday, on the eve of couture week in Paris.

In the crowd were a number of industry players and designers including AMI’s Alexandre Mattiussi and last year’s winner, Wanda Nylon’s Johanna Senyk who threw her arms around Y/Project’s creative director Glenn Martens. “I always say, winning ANDAM was a bit like when you fall in love with someone, this feeling that anything is possible,” she said.

The award’s endowment of $280,000 comes at a crucial time for Y/Project which is in the process of restructuring as it moves into its next phase, with new factory partners in France and Portugal among recent developments.

“We’re growing fast and it’s extremely difficult to keep up with all the requests. We have no backers and it’s like, every day waiting for the shops to give us their pre-payments. This is a big deal for us, it’s definitely going to help,” said an elated looking Martens.

The Paris-based designer, who grew up in the Belgian city of Bruges and attended Antwerp’s Royal Academy of Fine Arts, made fashion fame with his deconstructed denim that can be ruched or folded back to create a wader effect. He likes to tumble together disparate references, from classical tailoring to streetwear to offbeat historical references. A master at using deconstruction techniques to create new garments, Martens is also known for his exaggerated swirling volumes, though his latest collection was more controlled in its execution.

For one year, the designer will also benefit from a mentorship by Francesca Bellettini, president and chief executive officer of Yves Saint Laurent, covering both the creative and strategic dimensions of his business. “Glenn Martens has the talent, creativity and passion to be one of the designers that will contribute to keeping fashion relevant,” said Bellettini. “Together we will try to define the structure and environment to optimize his future and next opportunities to grow. I look forward to embracing this new exciting challenge together.”

The designer will also be sprinkled with 10,000 euros’ worth of crystals from Swarovski to be used within the year following his fellowship.

The other contenders for the honor, now in its 28th edition, were Aalto, Koché, Martine Rose.

This year’s Creative Label prize — worth $112,000 — went to the fledgling Paris-based indie label Avoc, which will receive a year’s worth of mentoring on its digital and communication strategy from Ruth Chapman, cofounder and co-executive chairman of Matchesfashion.com, as well as mentoring sessions from the buying teams of Galeries Lafayette. The retailer will also buy the brand’s next two collections, giving it prime placement in its Paris flagship’s space dedicated to young creation. “There was something about all of the brands that [were in the running], but when [Avoc founders Laura Do and Bastien Laurent] spoke, they won our hearts, it was a landslide because they were so compelling in terms of their vision for the brand, where they came from. There was no doubt that they were going to succeed,” said Chapman.

The Accessories Design Prize, which comes with a grant of $56,000, went to Brazilian jewelry designer Ana Khouri. Scooping the event’s new prize fashion innovation, meanwhile, worth $33,000, was smart mannequins specialist Euveka. The brand will receive a year’s worth of mentoring from Pascal Morand, executive president of La Fédération de la Haute Couture et de la Mode, who is also a member of the French National Academy of Technologies.

A 25-member jury composed of fashion executives, editors, actresses and models selected the victors, with Chapman, Morand and Sophia Neophitou-Apostolou among the new members.

ANDAM is financially supported by 17 private and institutional partners. The grand prize is open to designers of any nationality willing to establish a business in France. The French acronym for the National Association for the Development of the Fashion Arts, ANDAM was founded in 1989 by Nathalie Dufour, with the support of the French government and with Pierre Bergé as president. ANDAM has been a springboard for an array of designers who would go on to achieve international recognition, including Martin Margiela, Viktor & Rolf, Christophe Lemaire and Jeremy Scott.