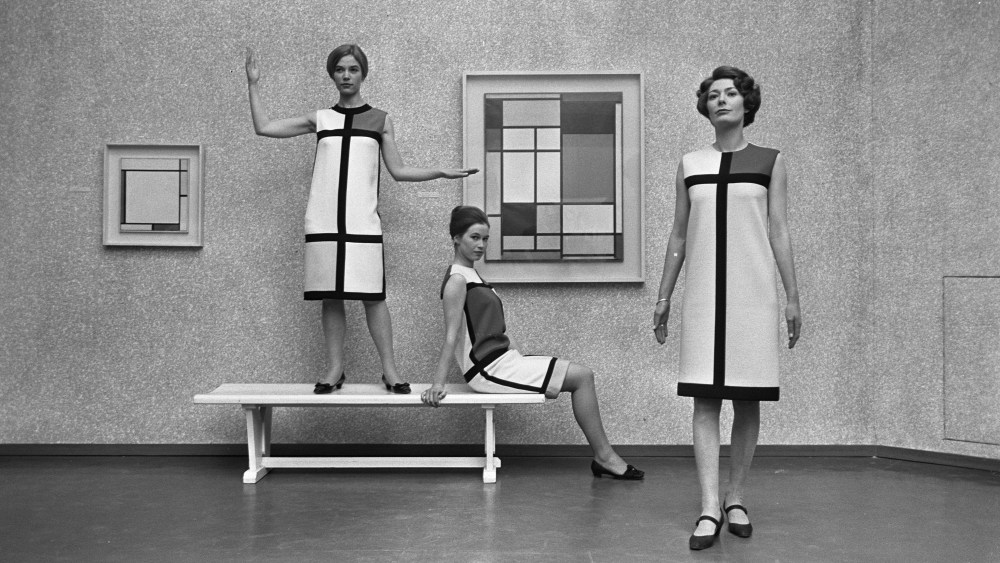 PARIS — To celebrate the 60th anniversary of the house of Yves Saint Laurent, the late couturier’s creations will be displayed at six major Paris museums alongside some of the art works that inspired them.

Imagine his 1965 Mondrian dress, juxtaposed with the Mondrian painting it references, at the Pompidou Center. Or a period-style polka-dot dress from 1986, displayed next to fragments of Claude Monet’s version of “Le Déjeuner sur l’herbe” at the Musée d’Orsay.

Madison Cox, president of the Fondation Pierre Bergé-Yves Saint Laurent, said he did not want a blockbuster retrospective, like the 1983 show at the Metropolitan Museum’s Costume Institute, or the exhibition at the Petit Palais in 2010.

“It’s already been done,” he told WWD. “To me, Yves Saint Laurent has always been cutting-edge and innovative, talking about how to see fashion in different ways, how to project fashion in different ways, and also how to look back at his work and how to make it relevant, in a sense. And I felt that there was something else that could be said about Saint Laurent and his relationship with art.”

The designer showed his first collection under his own name in January 1962 at the age of 26, having made a sensational entrance into the world of Paris couture by succeeding Christian Dior at the helm of his namesake house following the founder’s death in 1957.

While some of Saint Laurent’s couture creations over the years directly mirrored works by the likes of Vincent van Gogh and Pablo Picasso, art works and literature indirectly inspired almost everything he produced. The Musée d’Orsay will highlight the link between the designer and author Marcel Proust, as well as his exploration of gender codes.

Meanwhile, the Louvre will focus on Saint Laurent’s fascination with light, gold and the decorative arts through a dedicated section in the ornate Galerie d’Apollon, home to some of the museum’s most precious historical collections, including the French crown jewels.

“The idea was to underline the richness of these various Paris museums’ permanent collections. So we’re not taking an empty temporary exhibition space and filling it, but we’re actually placing the Saint Laurent designs within the permanent art galleries,” Cox said.

He had initially planned to involve several New York City museums as well, but the pandemic scuppered that project. Getting six major Paris institutions aligned was no small feat, especially as several museum directors swapped seats in recent months. But there was plenty of goodwill.

“Everyone had something to say about Yves Saint Laurent,” Cox said. “Many of them had their own stories to tell, whether it was a first perfume that they were given at 16, or a scarf that their parent wore, or a piece of clothing that they may have cherished when they were in their 20s or 30s. He somehow touched all of their lives in one form or another.”

The designer’s life and business partner, Pierre Bergé, also donated many items from their vast art and antiques collection to French museums following Saint Laurent’s death in 2008. As president of the Paris Opera and co-owner of French newspaper Le Monde, Bergé played a major role in French culture.

He also made sure Saint Laurent’s legacy was preserved, with the creations of two permanent museums in Paris and Marrakech. As part of the anniversary exhibition, the French museum, located in the designer’s former couture salons, will present archival objects that illustrate the behind-the-scenes process of making the collections.

“We will be presenting no clothes. I think it’s interesting also for the public to see, what is the process from a simple sketch with an HB pencil to almost the finished product, which is a toile, or a muslin dummy, that was produced for each item,” Cox said.

“We really felt it was a way to also pay tribute to all those, as they say in French, petites mains: the seamstresses, the hat-makers, the shoe-makers — all those people that were involved in what makes a maison de couture,” he concluded.