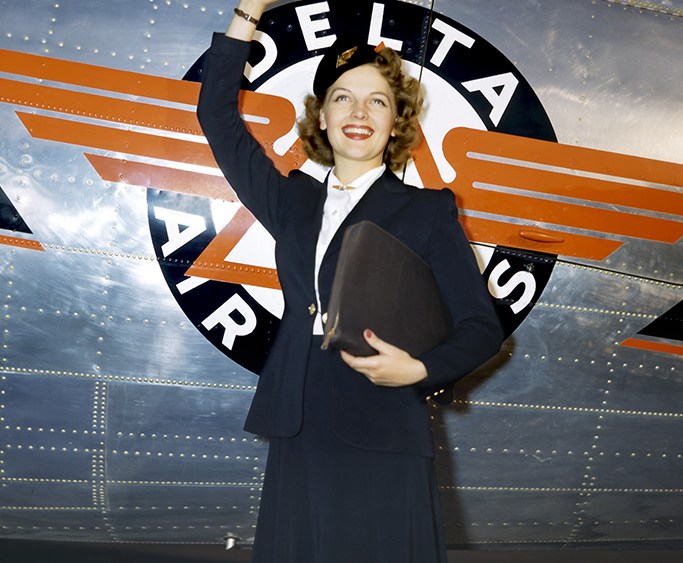 Zac Posen is looking skyward to build a global brand, having secured a deal with Delta Air Lines to design uniforms for 30,000 employees, including its highly visible flight attendants.

Posen’s uniforms will be unveiled internationally in early 2018, and the alliance stands to raise his profile substantially.

In addition to creating uniforms for Delta’s 20,000 male and female flight attendants, Posen will suit up its airport service agents, and he will advise on the uniform project under way for Delta’s ramp and ground support crews, cargo agents and TechOps employees. The designer was welcomed with rousing applause from a few hundred Delta staffers Thursday afternoon at Industria Studios in New York, where the partnership was unveiled.

The crowd was dressed in their current uniforms, which were designed by Richard Tyler, who first started working with the company in 2006. During Thursday’s event, Posen quizzed employees about their style preferences and functional needs. While some bemoaned their current attire as “the blandest things you have ever seen,” others posted suggestions like “classy, sophisticated, sharp-dressed.”

He said the contract will “hugely” affect his brand. Posen said, “This has amazing reach with the internal Delta community and the 170 million people that fly with Delta annually.”

Terms of the deal were not disclosed but industry sources said designers typically earn between $400,000 and $1 million for designing uniforms for domestic airlines.

Posen noted that the partnership is a great opportunity for him to do men’s wear, which he does not offer currently in his own signature collection, even though he does design what he wears every day, head-to-toe. Noting that durability and fire-retardant fabrics are essential for the uniforms, Posen said he was looking forward to working with “technological developments in fabrics that I can’t necessarily put into my own collection. I watch a lot of NHK TV which always has shows with great technological fabrics on late at night.”

“I think there is something kind of glamorous and practical about flying. Just aerophysics and design are very inspiring to me — how things move through space is informative to the kind of clothing that I make,” he added. “And the kind of construction lines that I use are about form, function and ergonomics. This is industrial design so I can work with technology in a different way, but I think at the foundation all clothing has a technical aspect and a traditional one so I just have to bring that into today with the look. Once it’s designed there will be extreme wear-and-tear tests.”

At Delta, Posen also follows in the footsteps of Oscar-winning costume designer Edith Head, who created the airline’s first Jet Age flight attendant uniform that was worn by in-flight staff from 1959 to 1965. In addition, the now-defunct Delta subsidiary, Song Airlines, tapped Kate and Andy Spade to design some of its uniforms from 2004 to 2006. Other designers collaborate with different airlines, such as Prabal Gurung, who signed on with Japan’s largest one, All Nippon, last year. Last month Stan Herman won an award for his JetBlue uniforms from the North-American Association of Uniform Manufacturers and Distributors. Herman, who designed uniforms for TWA, United and Eastern, now has a scholarship in his name to encourage young designers to pursue the field. Last fall, Vivienne Westwood unveiled new uniforms for Virgin Atlantic succeeding John Rocha, who had worked with the international carrier since 1999.

Other designer collaborations have been not so fruitful. KaufmanFranco’s monochromatic gray designs for American Airlines were greeted with mixed reviews and the company is said to be considering a new look. Designer Ken Kaufman declined to comment Thursday. Nearly two years ago, Alaska Airlines stopped working with Twin Hill and tapped Lands’ End to design uniforms for its 3,200 flight attendants after many of them were being stricken by rashes, headaches and hair loss that some suspected may have been caused by their attire. And a few years ago, Turkish Airlines faced a Twitter backlash for what disapproving customers described as Ottoman Empire-type uniforms that reminded some of a popular Turkish soap opera about the Sultan Suleiman the Magnificent dating back to the 16th century.