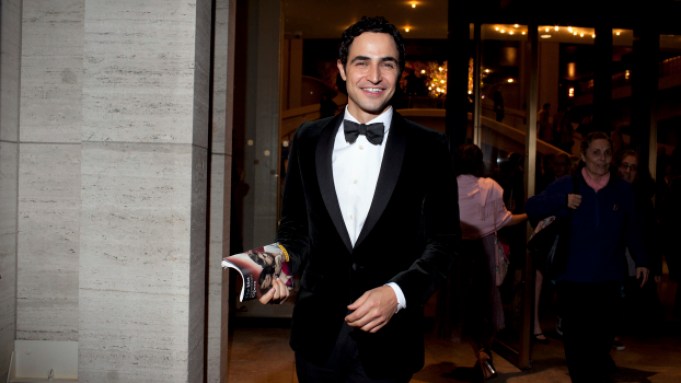 View ALL 21 Photos
Fashion has another major casualty: Zac Posen. The business the designer founded in 2001 shuttered on Friday.

“Horrible.” “Pretty intense.” “Surreal.” Posen thus described the closure in a conversation with WWD. “We had to close up House of Z, Z-Spoke, the whole company,” Posen said, calling the decision “surprising and immediate.” The spring collection he showed in September will not be shipped. “The board made a difficult decision,” he said. “We were in a sale process and we ran out of time.” Posen’s staff of about 60 was informed on Friday.

“There was a board vote. We had to make the call,” Posen continued. “My partners and I tried everything possible within our means to find solutions to keep it going. I have been trying to find the right strategic partners at this tough time in retail and in the industry. The clock ran out.”

As reported in April, Yucaipa Cos., Ron Burkle’s investment firm, which has owned a stake in the brand for more 15 years, was looking to sell. According to Posen, there had been discussions with several potential buyers, but ultimately none came to fruition. “I’ve been trying to not have this happen for a month. We found out this morning there was not [a solution],” he said.

Posen said Yucaipa and Burkle “have been very supportive,” and that “it’s important for me to be respectful of a very, very tough decision. I gave it all I could.”

That “all” included designing 14 fashion collections each year across labels including the signature Zac Posen; Zac Zac Posen and Brooks Brothers, for which he’s been women’s creative director since 2016. He expects that relationship to continue. Posen also oversees numerous licensee collections and recently designed new uniforms for Delta employees.

Posen’s arrival to fashion from Central Saint Martins was met with instant accolades; he was a charming, confident wunderkind whose penchant for overt, old-school glamour found quick favor with fashion insiders as well as the red-carpet set, a constituency he has retained through the years. It caught the eye of Sean Combs as well, back when his Sean John line was also fascinating the industry. Combs bought a 50 percent stake in the Posen business, which ultimately transferred to Yucaipa when it acquired a stake in Sean Jean.

While Posen recently focused on building the daywear side of his business, he continues to be known mostly for his impeccably constructed event dresses. “We have dressed everybody, from the biggest stars to emerging talents to royalty. I feel really fortunate to have made clothes they responded to,” he said. Among those who have worked his high-glam on the red carpet: Oprah, Michelle Obama, Rihanna, Gwyneth Paltrow, Naomi Campbell, Naomi Watts, Uma Thurman and Claire Danes. Last year he designed the reception gown Princess Eugenie gown wore after her marriage to Jack Brooksbank, and for the most recent Met Gala in May, he collaborated with General Electric on 3-D-printed gowns for several attendees including Katie Holmes and Jourdan Dunn.

Though his arrival to fashion was high-profile and sweet, Posen learned quickly about the challenges the fashion industry presents. He has been open about the obstacles he’s faced, and, until now, overcome, over nearly two decades in business, speaking about the bumps in interviews and the 2017 documentary, “The House of Z.” He considers it all worthwhile.

“I feel I was raised by this industry,” Posen said on Friday, noting the strength of the relationships he’s built with press, retailers and a devoted customer base. “It breaks my heart for my customer and the people who work for me,” Posen said of his company’s demise. He added that he’s proud as well of the talent he has nurtured, “emerging talent, those who have stayed with me and others who have gone out across the industry.”

Despite the shock of the forced shuttering of his company, Posen sounded resolute about the way he has conducted himself and positive about the future. “I think I’ve worked with integrity and care,” he said. “Hopefully, I’ll have a long career ahead. I need to take a little time to think about my options. I’ve been focused on my brand for a long time. Now, this is a new stage.”

Daniella Vitale Out at Barneys as ABG Takes the Reins