Her limited-edition design will be available in a handful of stores worldwide starting July 3. 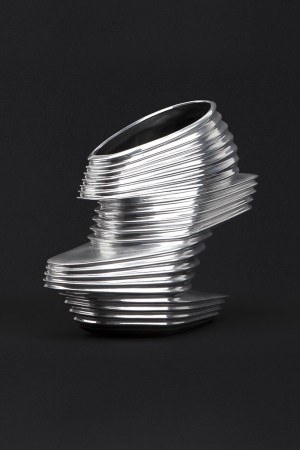 SKYSCRAPER SHOES: Zaha Hadid’s shoe design for United Nude, unsurprisingly, has something of the architectural about it. The vertiginous twisted shoes, which combine metallic chromed vinyl rubber lined with kid nappa leather and a fiberglass platform and heel, convey a sense of movement typical of Hadid’s creations.

“I have always appreciated those who dare to experiment with materials and proportions,” Hadid stated. “Our collaboration with United Nude reinterprets the classic shoe typology, pushing the boundaries of what is possible without compromising integrity.”

The shoes will be made to order in colors including silver, black, bronze and gold in European sizes 35 to 40. They and are priced at $2,000 a pair and will be on show in a handful of stores including L’Eclaireur in Paris as well as on the Zaha Hadid Design and United Nude Web stores starting July 3.

It is not the first time the architect has created footwear for a brand — she designed limited editions for Brazilian labels Melissa in 2008 and Lacoste in 2009.

Hadid also created the prototype “Icone” bucket bag for Louis Vuitton in 2006 and has collaborated with Swarovski several times on jewelry.

With her architecture, she is also no stranger to the fashion world, having been behind Chanel’s Mobile Art Container in 2008 and several stores for Neil Barrett.

A boutique designed by Hadid for Stuart Weitzman will open in Milan during fashion week there in September.