Zara's new flagship, located in the Shibuya district, is one of its most prominent retail locations in Tokyo. 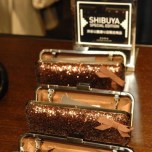 Zara celebrated the opening of its 50th store in Japan with a party and fashion show on Tuesday evening. The flagship, located in the Shibuya district, is one of the Spanish retailer’s most prominent locations in Tokyo. To commemorate the opening, Zara released two products exclusive to the store: a clutch bag and a pair of ballet flats coated in bronze glitter. The bag retails for 10,900 yen, or about $122, while the shoes go for 12,900 yen, or about $145. The store opened to the public on Wednesday.