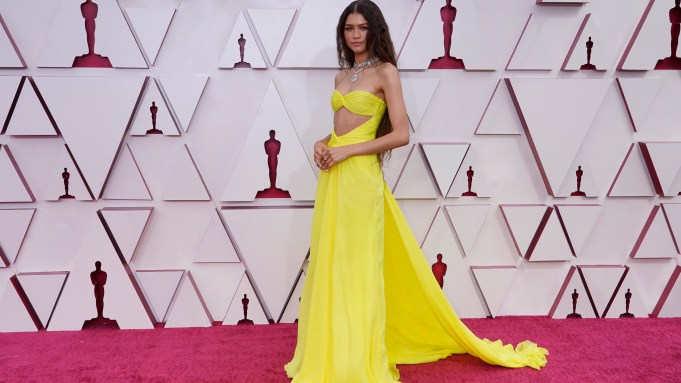 Zendaya, who turns 25 today, has become one of the biggest style stars to watch. The “Euphoria” actress has worked with fashion stylist Law Roach for a decade, together creating some of her most memorable fashion moments, including some major red carpet appearances this last year.

For the 2020 Emmy Awards — where Zendaya won the award for Lead Actress in a Drama Series for her role in HBO’s “Euphoria” — the actress wore a Christopher John Rogers dress from fall 2020 dress with a plunging neckline, black puffy sleeves and a voluminous purple skirt. Roach uploaded images on Instagram, as the actress sparkled in Bulgari jewels and wore a pair of Christian Louboutin heels.

Then she changed into a custom gown by Giorgio Armani Privé, which featured a bedazzled bralette, and a billowing polka dot skirt. For this look, her hair was in a messy bun.

More recently, Zendaya stunned at the 2021 BET Awards, where she wore a lengthened version of the Versace dress Beyoncé donned during her performance of “Crazy in Love” at the 2003 BET Awards, paying tribute to the legendary artist. She paired the dress with purple Stuart Weitzman heels and Bulgari yellow and white diamond earrings and ring.

On her Instagram Stories, Zendaya uploaded an image and clips from Beyoncé’s performance in 2003. Roach posted the same photo and video on his personal Instagram account with the caption: “Paying homage to the Queen Beyoncé wearing @versace SS2003…..get you a stylist with [an] ARCHIVE!!!!”

“It doesn’t seem like 10 years at all. We’ve had a lot of looks and a lot of moments over this decade and every time seems just as magical as the first,” Roach told WWD in January. “I think the process has become easier, and we know each other like the back of our hands. I’ve been very blessed to be a part of the curation of her style and her fashion identity. We call each other our fashion soulmates. She calls me her fashion god brother. It’s just such a beautiful, easy thing.”

Zendaya’s style has also gotten the attention of many major designers and brands. Designer Tommy Hilfiger tapped the actress as an ambassador in 2018, with the two codesigning their Tommy x Zendaya capsule collections. Then in 2019, she became a spokesmodel for Lancôme, as well as an ambassador for Bulgari and Valentino in 2020.

Zendaya rose to fame when she played Rocky Blue in the Disney Channel series, “Shake It Up,” alongside Bella Thorne. Since then, Zendaya has taken on the big screen by starring in popular films like the “Spider-Man” franchise, “The Greatest Showman,” “Malcolm & Marie” and upcoming science epic “Dune.”

In 2019, she took on the role of Rue Bennett in the HBO hit series “Euphoria.” For her performance, Zendaya won the Emmy Award for Outstanding Lead Actress in a Drama Series in 2020. She made history by becoming the youngest winner to receive the award, as well as the second Black actress to win in the prestigious category.

Click through the above gallery to see some of Zendaya’s most memorable fashion looks throughout the years.