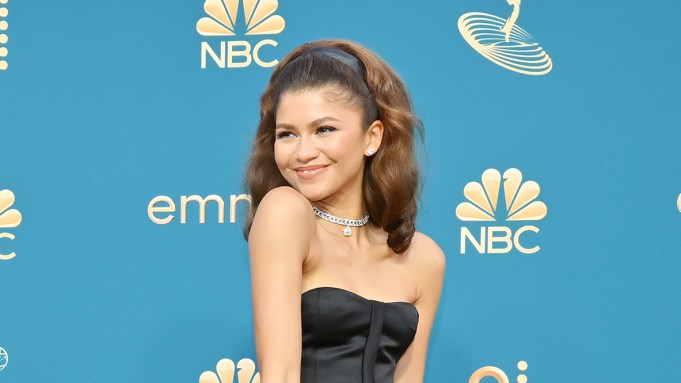 Zendaya attended the Emmy Awards on Monday in Los Angeles in an Old Hollywood-inspired look.

The actress arrived on the red carpet in a black Valentino gown with a corset-style bodice that had a bow at the waist.

Zendaya accessorized with two diamond earrings and a diamond necklace from Bulgari. She currently stars in the brand’s campaign alongside Anne Hathaway. For beauty, she went for a natural makeup look.

The 2022 Emmy Awards honor the best performances and programs in television. “Saturday Night Live” cast member Kenan Thompson will host the event at the Microsoft Theater in Los Angeles. HBO’s “Succession” is leading the nominations with 25 nods, followed by “Ted Lasso” (20), “The White Lotus” (20), “Hacks” (17) and “Only Murders in the Building” (17). The Geena Davis Institute on Gender in Media will also be presented with the Governors Award in recognition of their work to promote gender balance in the entertainment industry.