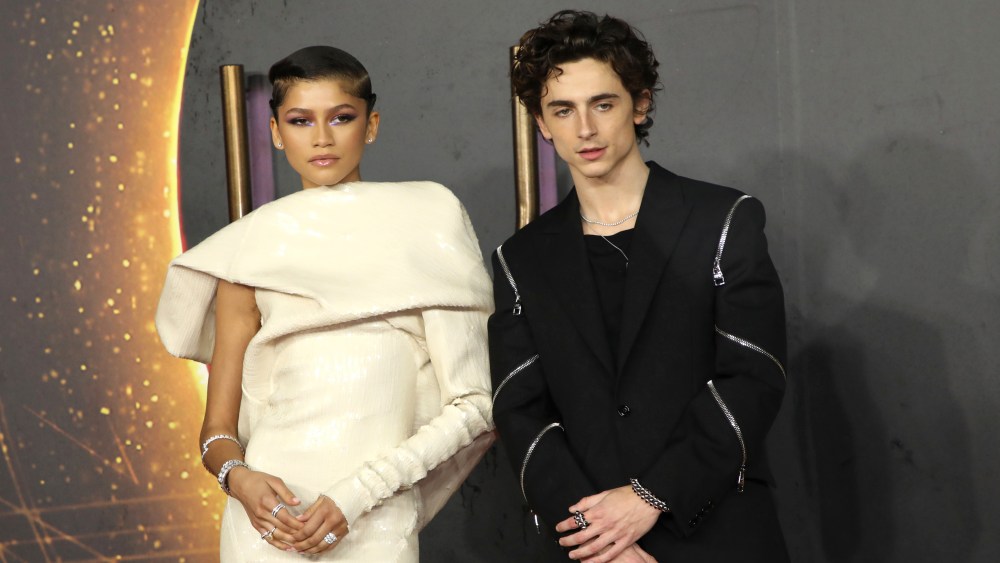 Zendaya and Timothée Chalamet are rounding out their press tour for “Dune” with two more high-fashion looks.

The stars, who are cast in the highly anticipated sci-fi film, attended the “Dune” London premiere Monday night wearing looks off the runway.

Zendaya, who has previously given a nod to the the themes and motifs in “Dune” through her fashion during the press tour, looked to a warrior-inspired dress from the Rick Owens fall 2021 ready-to-wear collection. The ivory-hued dress consisted of an oversize shoulder detail, asymmetric long sleeve and subtle sequined detailing. The actress wore the look with her hair in a braided updo.

Chalamet joined his co-star on the red carpet wearing an industrial-inspired black suit from Alexander McQueen’s spring 2022 men’s collection. The black suit was embellished with silver zipper details that were placed on the jacket sleeves and along the trousers. The actor paired the look with silver chain jewelry.

The two stars were joined by other members of the “Dune” cast, including Rebecca Ferguson, Jason Momoa, Sharon Duncan-Brewster and Babs Olusanmokun, on the red carpet.

After the premiere, Zendaya changed into a cut-out, lingerie-inspired dress by fashion designer Nensi Dojaka, who recently received the 2021 LVMH Prize for Young Designers.

On Saturday, Zendaya and Chalamet came together again in London for the “Dune” photo call, where both stars stuck to their high-fashion style in standout looks. Zendaya wore a look designed by Andreas Kronthaler for Vivienne Westwood’s spring 2020 ready-to-wear collection, which consisted of a chain-mail-embellished top paired with a hand-painted checkered skirt. Chalamet wore a custom Stella McCartney blue and white suit in the designer’s fungi forest organdy print.

Both stars have worn several statement-making high-fashion looks during the “Dune” press tour over the last month and a half that have resonated with fans, most notably at the 2021 Venice Film Festival last month where Zendaya wore a custom, form-fitting Balmain dress inspired by sand dunes and Chalamet wore a matching black sequined sweater and trousers by Haider Ackermann.

Click through the above gallery to see more photos from the “Dune” London premiere.