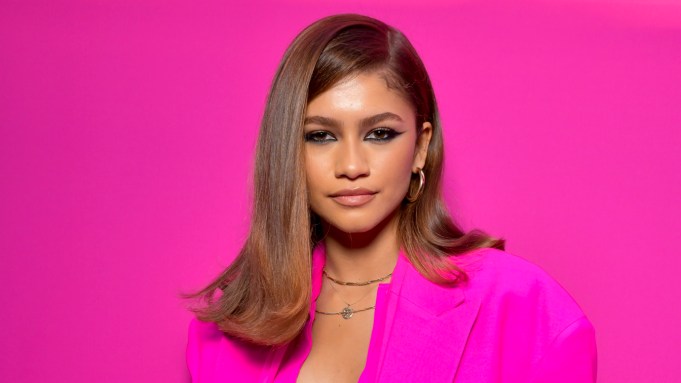 PINK POWER: Zendaya was pretty in pink when she caused a commotion at Sunday’s Valentino show at the Carreau du Temple. Hundreds of fans waited for hours to catch a glimpse of the “Euphoria” star, who wore a shocking pink suit.

Then again, the entire building was decked out in the color, a bright, bold version created for Pierpaolo Piccioli’s Pink PP Collection.

“It was so fun, so so fun,” declared the star after Piccioli’s parade of the shade. “I really enjoyed it, it was nice and flowy.” She bopped along to Yazoo’s “Only You,” which played various versions of the lyrics: “All I needed was the love you gave, all I needed for another day” on repeat. The star graciously posed for dozens of pictures after the show — even the front row is full of fans — before going backstage to meet the designer.

And love was in the air, as Piccioli gave a touching speech to set the mood for the show. “It was a hard week, it is a hard moment. We reacted the only way we know, by working. We reacted, not allowing to get paralyzed by the fear of war. Trying to remember that the privilege of our freedom is now bigger than ever, our thoughts go to those who are suffering: we see you, we feel you and we love you because love is the answer, always.”

Maluma was feeling it, too. “It’s so nice to come here to Paris and feel the love from everyone. There are crazy things happening now in the world and feeling that love and that warmth from the people here in Paris is amazing. It makes me feel like we still have hope with everything that is going on,” he told WWD.

Vanessa Hudgens was celebrating her first Paris Fashion Week by twirling in circles in awe of all the color. “It’s literally my favorite color and I can’t believe I’m completely surrounded by it,” she said, stepping inside Piccioli’s jewel box. “I feel like a pop of color can really lift the spirit, and we can all take a lift in spirit right now.”

After producing “The Princess Switch 3” last year, she’s making a move into creating her own projects, she said. “I’ve definitely got my producing hat on. It’s really exciting dreaming up things from scratch and bringing them into the world. It’s like having these babies and seeing them grow.” She didn’t divulge if there would be a fourth installment of the Princess story, which sees plenty of pink in the costume design.

Formula One driver Lewis Hamilton said it’s the third show of the “iconic” brand he has attended. “I wanna stay focused on my job but I have too much stuff going on,” he joked. He’s known Zendaya for a while, he said, and the two exchanged hugs before they sat down.

Vanessa Kirby praised Piccioli’s vision. “He’s a genius,” she said of his work. “It’s always very visceral and really makes you feel something when you wear it.” The actress, who plays White Widow in the “Mission Impossible” series, shot down any movie-related questions. Still, she was wearing an all-white suit, a nod perhaps to her next role. Read the full runway collection review here.

Demi Moore, Marisa Tomei and Gugu Mbatha-Raw Got Toasty at the Chloe Show

Serena Williams Talks Up Her $111 Million VC Fund at Balmain