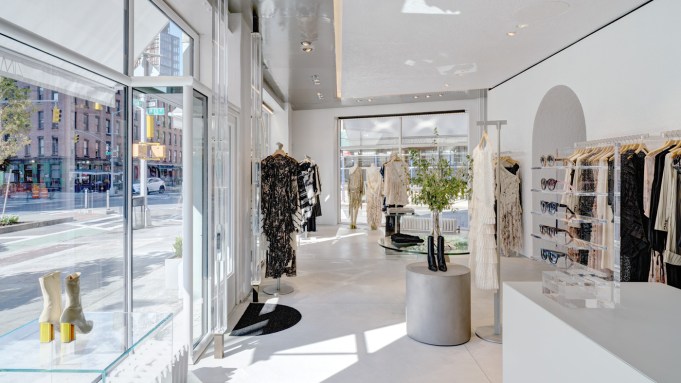 SPREADING OUT: Zimmermann has expanded the number of its freestanding stores to 26 with the opening of a new boutique in the Meatpacking District in New York. The 2,000-square-foot store, which has a light, airy, feminine feel, is based at 652 Hudson Street. It features Zimmermann’s ready-to-wear, swim and resort collections. The Meatpacking store is the brand’s fourth New York store, following stores in SoHo, the Americana Manhasset and East Hampton, N.Y.

Keeping with its Australian roots, the store was designed by Australian architect Don McQualter of Studio McQualter. The company declined to reveal first-year sales projections.

“We have always loved New York, and its energy and have spent a lot of time in the city over many years,” said designer and founder Nicky Zimmermann. She said the company collaborated with Cutler & Gross to design an exclusive five-piece sunglasses collection. In addition to the New York store, the sunglasses will be available at stores in Bal Harbour, Fla., London, Los Angeles and Sydney.

Discussing how business was performing so far, Simone Zimmermann, co-founder and chief operating officer, said, “The store has exceeded expectations since opening – it’s a really relaxed environment for our clients and also convenient for people living in this part of the city.”

When asked why she chose the Meatpacking district, which has seen numerous store closures, she said,  “We wanted another downtown that provided a bit of contrast to our Mercer Street store, which is currently undergoing a complete renovation also. SoHo isn’t convenient for some of our downtown clients and this position on Hudson Street is really visible and easy to access. It’s also a bit more relaxed than the hustle and bustle of SoHo.”