Patrick Grant and Eddie Jordan got shout-y over one particular answer. 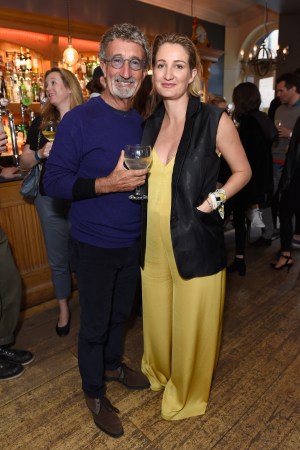 QUIZZICAL: It’s not often that a stand-up shouting match erupts at a fashion launch event, but given the circumstances, it was inevitable.

To mark the launch of her men’s capsule knitwear collection London designer Zoë Jordan hosted a pub quiz that brought out a bold, competitive streak in some of the guests. As the answers were announced, designer Patrick Grant and Jordan’s father, the former Formula One team boss Eddie Jordan, engaged in a great deal of shouting and finger jabbing about the answer to the following question: Which Irish sports stadium is the third largest stadium in Europe?

Radio and television presenter George Lamb played the role of quiz master, asking puzzlers like, “The Sahara Desert extends into how many countries? 5, 10 or 13?”; “What number lies between 5 and 9 on a British dartboard?” or “Who was the lead singer with Bronski Beat and The Communards?”

There was only one question — admittedly, a no-brainer — lobbed at the style set: “What was Givenchy’s first name?”

The designer’s pub quiz specialty was wrestling. “I was obsessed with WWF [World Wrestling Federation] in the Eighties, I knew everything about it, and would take my friends to see matches under the pretense of taking my brother,” she told WWD. “Hulk Hogan and all those guys — I loved them.”

Grant’s team won the competition, beating those made up of guests including Polly Morgan, Lara Bohinc, Quentin Jones and James Cook — who attended alone while his wife, Poppy Delevingne, was at Coachella. Prizes included Champagne and — what else? — sweaters.

After the quiz, an Irish fiddle band played for guests, with Eddie Jordan on percussion, beating on a wooden crate or playing the spoons. “I’ve been playing spoons since [I was small], I wanted to play the drums but if I’d gone home with a set of drums to Mother Eileen [Jordan’s mother] I’d have been beheaded,” he said.

The designer’s capsule collection consists of 12 cashmere-blend styles and is available now on the designer’s website. Called Knitlab: XY, the sweaters come in a palette of ash gray, slate, cobalt, indigo, moss with ember and citron accents, in styles from a classic crew neck, to a hoodie and a cable knit option.

The launch campaign features new talent and the couple Tigerlily Taylor and Henry Pedro-Wright. Taylor is the model daughter of Queen drummer Roger Taylor and Eighties model Deborah Leng, while Pedro-Wright has modeled for Tommy Hilfiger, Marni and APC. Prices range from 245 pounds to 300 pounds, or about $352 to $431.