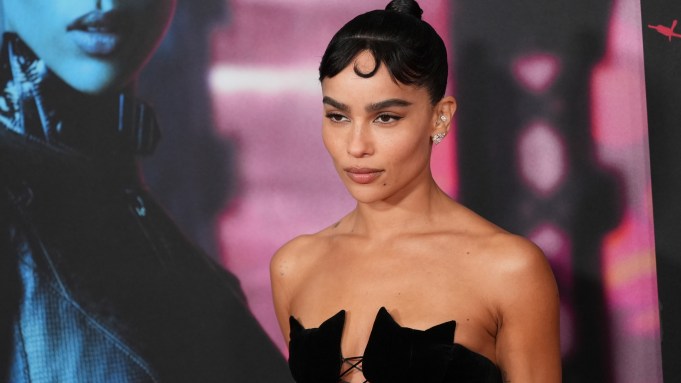 Zoë Kravitz gave a nod to her Catwoman character with a high-fashion moment at the New York City premiere of “The Batman.”

The actress attended the premiere Tuesday night wearing a custom black velvet lace-up Oscar de la Renta gown with a cat-shaped bustier, which paid homage to Kravitz’s Catwoman character in the latest version of the DC Comics movie. Kravitz kept the look minimum outside of the gown, pairing the dress with delicate rings and earrings.

Williams attended the premiere in a purple sequined dress from Dolce & Gabbana, while Fox stuck to her signature latex style in a black trenchcoat over a silver shift dress from Lanvin’s spring 2022 ready-to-wear collection.

Kravitz’s custom Oscar de la Renta dress is just the latest high-fashion moment she’s had during the “The Batman” press tour. The actress attended a London screening last week wearing a custom, cutout Saint Laurent dress designed by creative director Anthony Vaccarello. She also wore other Saint Laurent pieces during the press tour, including a leather trenchcoat over a mesh top while promoting the film in Paris.

Click through the above gallery to see more photos from “The Batman” New York City premiere.