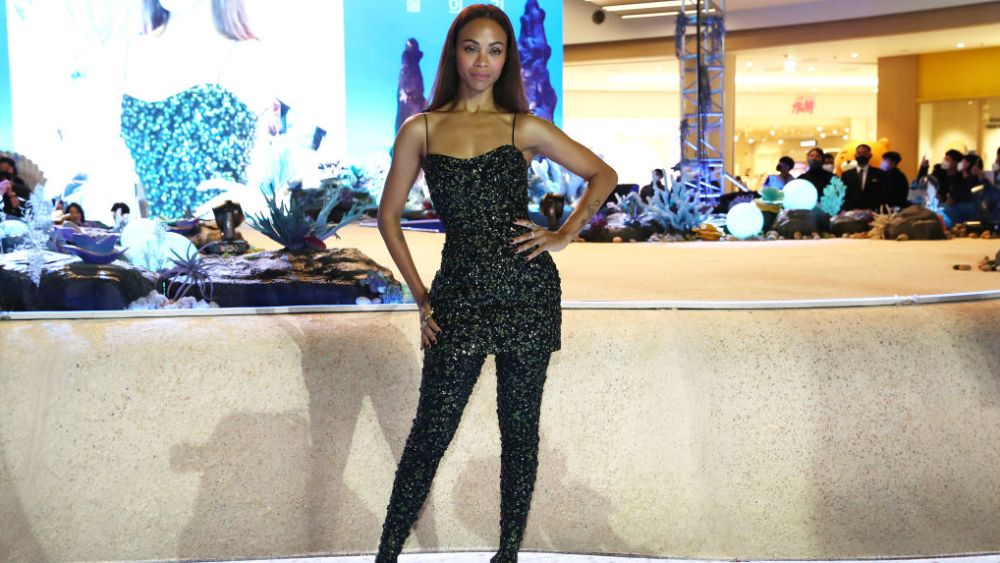 Zoe Saldaña made a shimmering arrival to the “Avatar: The Way of Water” premiere on Thursday in Seoul. For the occasion, she was dressed head-to-toe in sequins.

Saldaña’s outfit consisted of a sequin strappy minidress with matching sculpted pants that turned into pointed-toe stiletto boots. When it came to accessories, she wore midi rings.

Saldaña’s hair was styled into a middle part, with pieces framing her face. For makeup, she kept it glowy, with blush, a matte pink lip and black eyeliner.

Saldaña usually works with stylist Petra Flannery, who in the past has also outfitted Reese Witherspoon, Iris Scot and Renee Zellweger.

The actress was joined at the movie premiere by costars including Sam Worthington and Sigourney Weaver and director James Cameron.

Saldaña continues her upcoming film’s press tour, utilizing it as a chance to showcase her standout fashion looks. Earlier this month, to the London premiere of the film, she wore a beaded, corseted Alexander McQueen gown with a tulle skirt from the pre-fall 2022 collection. In November, while attending an episode of “Live with Kelly and Ryan,” she wore a simple lavender skirt set by Lafayette 148 and paired the look with a long black trench coat.

In November, Saldaña spoke to WWD about her hopes for the upcoming sequel to the first “Avatar” film, which was originally released in 2009. The second installment of the film comes 13 years after the first.

“The reintroduction is also the refreshing of it. The rejuvenation of it is also very exciting,” Saldaña told WWD. “Look, I’m not aiming to get the same results that we got in the first one because that was a surprise. That was a wonderful surprise. We were not expecting it. And the reception was just imaginably beautiful. Obviously I’m hoping for ‘Avatar 2: The Way of Water’ to have a very beautiful impact on people. But it’s not for the sake of breaking any records or making a ton of money. I think this saga is special. It was made with a lot of love and a lot of work. And it’s an experience worth having.”