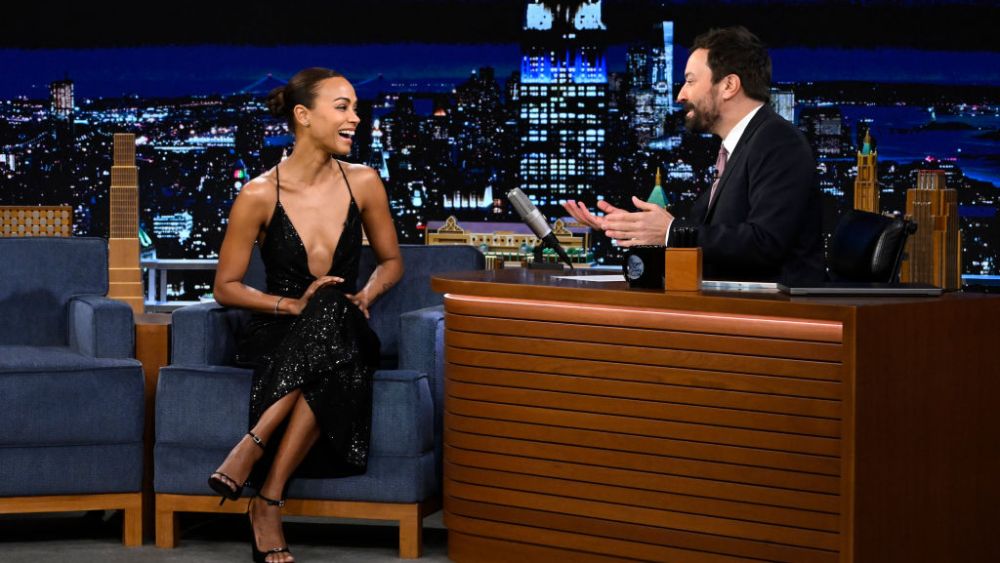 For her recent television appearance, Saldaña had on a black hand-embroidered sequin jersey dress coordinated with a pair of black strappy sandals.

Saldaña’s dress was from Michael Kors’ spring 2023 collection. The collection was described as Michael Kors bringing resort to the city.

She finished the look by accessorizing with small diamond earrings and a bracelet.

Saldaña worked with stylist Petra Flannery to create her look. Flannery, who also works with Jenna Elfman, Amy Adams and Claire Danes, is Saldaña’s go-to stylist and has dressed the actress in brands including Gucci, Fendi and Alexander McQueen.

For makeup, Saldaña went for a minimalist look, featuring a matte lip, light eye shadow and a touch of mascara. For hair, she had it parted down the middle, slicked down at the top and then pulled back into a tight bun.

Saldaña promoted her new movie “Avatar: The Way of Water.” During her segment with Jimmy Fallon, the actress also discussed her roles in the Marvel Cinematic Universe, as she has also starred in the “Guardians of the Galaxy” and “Avengers” franchises.

The actress is set to star in the third installment of “Guardians of the Galaxy” releasing in May. She also discussed raising her kids and how she ended up getting cast in “Avatar.”

In an interview with WWD, Saldaña said, “‘Avatar,’ it’s just my baby. It’s everybody’s baby. And to see this baby now being a teenager, like a young adult and getting to share it with the world is just…I felt like this day would never come and it’s finally here.”

“Avatar: The way of Water” will be released in theaters on Dec. 16.