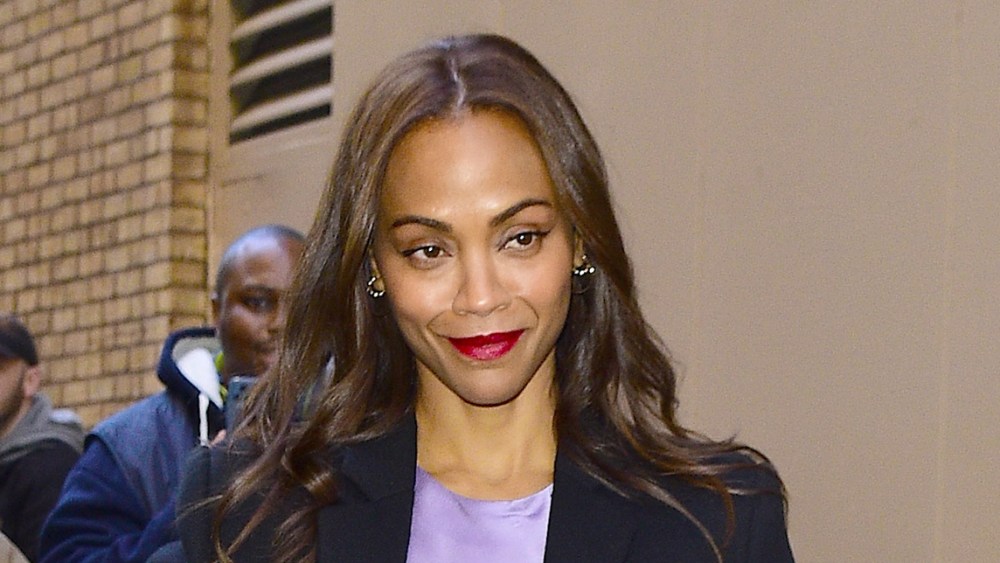 Zoe Saldaña made a striking appearance on Monday, wearing a purple look for “Live With Kelly and Ryan.”

The actress wore a minimalist purple top and skirt from Lafayette 148 with a black blazer coat and brown pumps. She accessorized the look with several rings.

For makeup, she went for a television-ready look with a hint of rose blush, light eyeshadow and a ruby-red lip. For hair, she parted it down the center and went for a loose, wavy style.

Saldaña is now promoting her new film “Avatar: The Way of Water.”

“‘Avatar,’ it’s just my baby. It’s everybody’s baby. And to see this baby now being a teenager, like a young adult and getting to share it with the world is just… I felt like this day would never come and it’s finally here,” she said in an interview with WWD.

Saldaña has managed to solidify herself as a sci-fi movie star with additional roles in the “Avengers” and “Star Trek” franchises. Between her role in the first “Avatar” movie and two “Avengers” films, she’s been in three of the five top-earning movies of all time.

Her success at the movie box office is also translating to success on the small screen. Her Netflix miniseries “From Scratch” is one of the streaming service’s most-watched shows for 2022.

Outside of another successful year for her film career, Saldaña has also found time for some fashionable moments this year. At Dior’s fall 2022 couture show in July, she attended with her relative Eli Saldaña.

“Avatar: The Way of Water” is a sequel to the 2009 Blockbuster hit “Avatar.” The science fiction film, directed by James Cameron, debuts in theaters on Dec. 16. The sequel stars Sam Worthington, Sigourney Weaver, Kate Winslet and Stephen Lang.