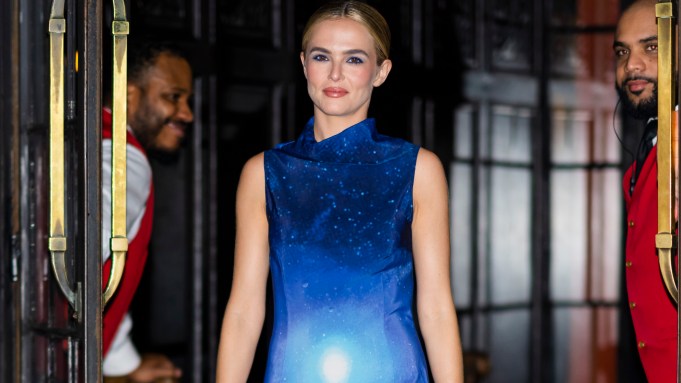 Zoey Deutch is continuing her streak of fashion-forward looks.

On Wednesday, the actress attended a screening for her new movie “Not Okay” in New York City. She wore a vintage blue Moschino gown that was sourced from Jennie Girl’s Closet paired with blue pumps by Santoni. She wore her hair up in a bun and kept her makeup simple.

She was styled by Elizabeth Stewart, who also works with the likes of Jessica Chastain, Viola Davis and Julia Roberts.

Deutch has stepped out in some of the most stylish getups this week while promoting her new movie, wearing creations from labels such as Valentino, Armani and Matthew Bruch, among others.

“Not Okay,” which premieres Friday on Hulu, follows the story of a desperate influencer named Danni Sanders who fakes a trip to Paris to earn more followers, but gets caught up in a lie when a terrorist attack occurs and people mistakenly assume she is one of the survivors.

Earlier this year, O’Brien and Deutch previously starred in the crime drama “The Outfit,” which follows a Chicago-based tailor whose primary customer base is a family of gangsters.

The actress gained recognition for starring in movies such as “Before I Fall,” “Everybody Wants Some!!” and Netflix’s “The Politician” and “Set It Up.”